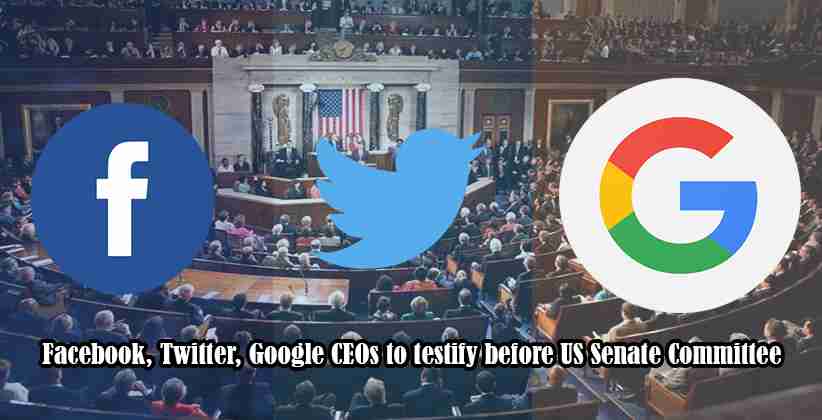 The next big tech hearing will take place on October 28, 2020 as the Chief Executive Officers (CEO) of Facebook, Twitter, and Google have agreed to voluntarily testify before a United States (US) Senate Committee.

CEOs of Facebook, Google, and Twitter subpoenaed by US Senate Committee Twitter on Saturday announced that Dorsey had voluntarily agreed to virtually testify on October 28, “less than a week before the US Presidential Election.”

“It must be constructive & focused on what matters most to the American people: how we work together to protect elections,” the company said in an official tweet.

According to a report by Politico, Zuckerberg and Pichai have also agreed to testify on October 28. Hence, the committee will not issue the subpoenas.

The hearing will focus on section 230 of the Communications Decency Act. Social media giants in the past have been accused of leveraging Section 230 to silence conservative viewpoints. The discussions were escalated when Twitter flagged US President Donald Trump’s tweet for “glorifying violence.” Since then, multiple tweets by the President have been flagged with labels such as "manipulated media" in addition to fact-checking labels.

The companies have denied allegations of political bias on multiple occasions.

“We’ve made our views clear on reactionary and politicized attempts to erode #Section230. They threaten the future of online speech and Internet freedoms. The reasoned and productive debate is essential,” said Twitter.

“Alleged ‘political bias’ remains an unsubstantiated allegation that we have refuted on many occasions to Congress. It has also been widely disproven by independent research,” it added.

“Technology companies argue that their broad liability shield should remain in place,” said the US Senator Roger Wicker had said on Thursday. “However, they disproportionately suppress and censor conservative views online. Public testimony from these CEOs is critical as the Committee considers several proposals to reform the Communications Decency Act.”

The legal proceedings moving forward are also likely to focus on the legal protection enjoyed by the tech companies along with their role in limiting misinformation and ensuring privacy.

Judiciary Aug 02, 2021 Nargis Bano ( Editor: Ekta Joshi ) Shares
0 Shares
The Delhi High Court expressed its displeasure on Wednesday (July, 28,2021), with Twitter Inc's appointment of a "contingent worker" as chief compliance officer (CCO) and stated that the microblogging platform was in violation of the new Information Technology (IT) rules.While the rules required the appointment of a key managerial person or a senior employee as CCO, Twitter disclosed in its affidavit that it had appointed a "contingent worker" via a third party contractor.“In his affidavit,...
Read full post

Crime, Police And Law Jul 21, 2021 Celin Sunil ( Editor: Ekta Joshi ) Shares
0 Shares
On Monday, July 19, 2021, the Supreme Court directed the release of Erendro Leichombam, a Manipur-based activist, who was detained under the National Security Act (NSA) for his social media posts allegedly on the efficacy of cow dung & urine as cures for COVID-19 in the context of the death of a BJP leader due to the virus.A Bench of Justices DY Chandrachud and MR Shah, ordered the release of the activist by remarking that he could not be detained in the jail even for a night. The...
Read full post