Hero Cycles’ Plan of Rs. 900 Crores Worth of Trade With China Quashed 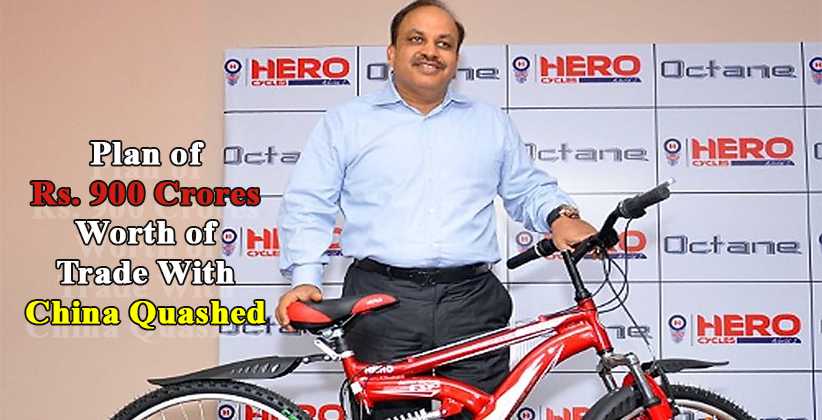 Following the event of extending technical help to members of United Cycles Parts and Manufacturers Association (UCPMA) to lessen the reliance on China, Hero Cycles’ Chairman-cum-Managing Director (CMD) Pankaj Munjal on July 3, 2020, notified the revocation of its future trade transactions worth Rs 900 crore with China. Pankaj Munjal, while conversing with a few media persons, stated, “In the coming 3 months, we had to do business worth Rs 900 crore with China, but we have canceled all those plans. This is our commitment to boycott Chinese products.”

In the intervening time, Hero Cycles had been importing parts of its premium bicycles and even complete premium bicycles also which are bought by professional bikers or even by the public for recreational hobbies. Presently, the cost of the premium bicycles in the market ranges from Rs 15,000 to 7 lakhs and above as well. Pankaj Munjal mentioned that they have rescinded trade tie-ups with companies in China and are on the lookout for new markets now. He claims Germany to be the top contender as a replacement to China. He added that Hero Cycles is plotting to establish their factory in Germany as they can cater to the European markets from that location too. Pankaj Munjal also went on to mention that the requirement of cycles has increased throughout the world in the last few months, mainly due to people becoming more active in the lockdown, and Hero Cycles is trying to expand its capacity to accommodate this high demand. He however admitted that minor organizations have borne losses during the lockdown period due to the pandemic. He stated, “This is the reason that we have come forward to help them and hence are ready to provide the technical help so that they can start making high-end bicycle parts which are being imported from China. ‘Cycle Valley’ can compete with China.” The Chairman-cum-Managing Director (CMD) mentioned, “Once Cycle Valley at Dhanansu village of Ludhiana comes up, we can easily compete with China. If India can make the latest computers, why can’t we make hi-tech bicycles.” He professes that all types of cycle manufacturing are quite possible within the country. He stated that he had conversed about losses suffered by the small-scale companies and organizations with Punjab’s Industry Minister. In the meantime, late on July 3, 2020, he also went to the site of Cycle Valley along with Ludhiana DC Varinder Kumar Sharma. Chinese companies had planned to finance this valley which will focus mainly and only on the premium and high-end cycles. The Cycle Valley has been planned to come up in 100 acres of land at a price of Rs 400 crores. The land acquisition for the same has already taken place erstwhile.