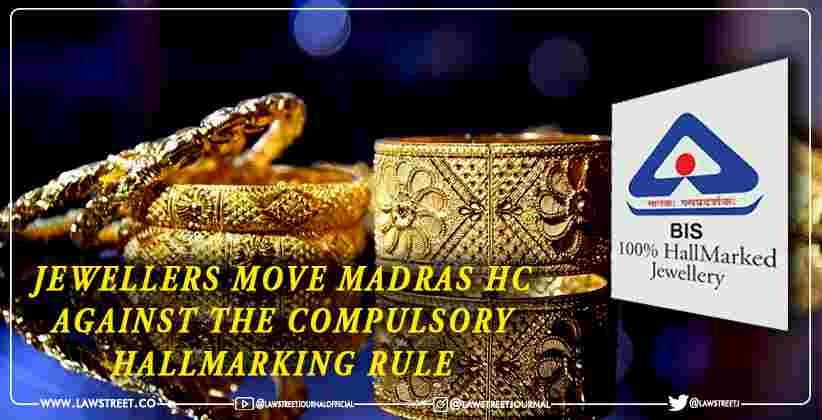 A Chennai jewellery Association has approached the Madras High Court challenging the rule of making hallmark mandatory gold jewellery and artefacts across the country.

Gold hallmark is a certification of purity, now made mandatory by the Order for hallmarking of Gold Jewellery and Gold Artifacts, 2020 and the Bureau of Indian Standards (hallmarking) Regulations, 2018.

The petition filed by C J A of jewellery Association seeking directions from the Madras High Court to declare the regulations as unconstitutional because this rule only allows sale of 14,18 and 22 kart gold.

The petitioner also stated that such a restriction violates Articles 14(Right to equality), 19(Right of freedom of speech and expression), and 21(Right of Life and personal liberty) of the Indian Constitution.

The petitioner added that,

“The real objective of the Indian standard is to ensure that a gold ornament sold from 22 karats is 22 karats. The sale of pure gold more than or less than 22 karats can never be prohibited.”

The Association also claimed that there could be no ban on better quality products and argued that the authorities had misinterpreted the provisions of the law.

The Petitioner further added that members of the petitioner's association have a fundamental right to conduct any business under the Indian Constitution. There can only be reasonable restrictions on these rights mentioned under Article 19 (2) of the constitution. In addition, it is not in the public interest to deny the right to purchase higher quality gold.

In addition, the petitioner also stated that the country’s infrastructure for jewellery hallmarking is inadequate, because the country has more than 500,000 jewellers, with an average of 1,000 crore jewellery that needs to be hallmarked.

When the hearing request came up, the first bench of Chief Justice Sanjib Banerjee and Judge Senthilkumar Ramamoorthy ordered the union government to submit a response by July 27, 2021.