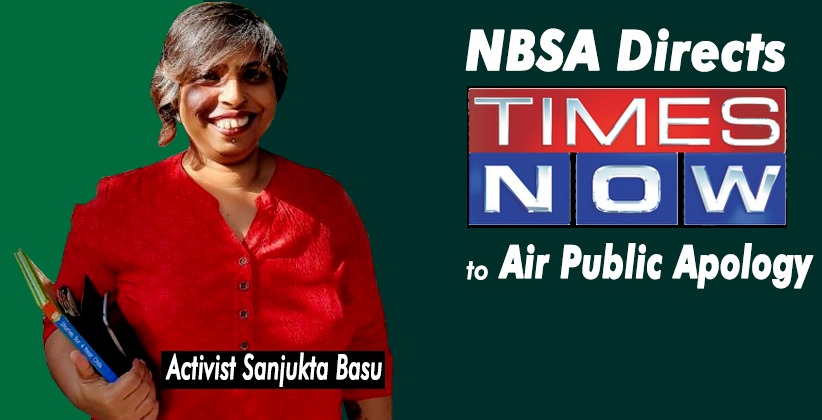 Times Now TV has been ordered by the News Broadcasting Standards Authority, NBSA, to air an apology to activist Sanjukta Basu for making offensive remarks about her during a 2018 debate.

In its order, on October 27 at 9 pm, the NBSA asked the channel to air the apology.

The broadcasting authority said that on April 6, 2018, Times Now ran a defamatory program about the author and social activist. In its shows, the channel referred to it as "Hindu hater," "vile troll," and said that it was part of the "troll army" of Congress leader Rahul Gandhi, the order said. It added that the channel did not contact her version to get her and also did not check the details until broadcasting, thereby breaching the guidelines of the organization.

"The Authority asked Times Now to broadcast the following message: "We regret that we did not take the version of the complainant Ms. Sanjukta Basu in the programs aired on 6.4.2018-'India Upfront'@ 8 pm and 'The NewsHour Debate'@ 9 pm on Times Now channel, thereby breaching the standards of impartiality and objectivity and maintaining neutrality and fairness in reporting. We describe that there was no intention of discrediting Ms. Sanjukta Basu.

NBSA was of the opinion that there was an absence of program neutrality, the order said. In addition, the Authority demanded that the channel delete any broadcast video from its website, YouTube, or any other links and send it to NBSA in writing.

The news channel was also ordered to send the compact disc, or CD, containing the telecast apology with date and time as a mark of compliance within one week of airing, the order said.

Further, Times Now has to share the order with the media, members of the News Broadcasters Association, and also put it on its website and include it in its annual report.

The Supreme Court had moved Basu on Saturday alleging that her complaint before the NBSA filed in March 2019 was pending to date. Even before the matter could be identified or the hearing could begin, the NBSA has hurriedly issued the long-delayed judgment on my Times Now channel complaint deciding in my favor, "she said following the order of NBSA in a press release."

The activist said the order was not the end of the war and referred to it as the "first landmark."

“In pursuing my case I’ve come across many weaknesses in the way NBSA functions and it is an irony that in front of Supreme Court and Bombay High Court, NBA and Union of India have been arguing that NBSA is already a robust body for broadcast media standards and grievance redressal and no improvement is required. This is simply not true, as my case shows that there are many questions that remain unanswered. To begin with, why did it take them 15 months to give a judgment when their mandate is to settle complaints in 3 months, and how come in just 24 hours of my moving to SC they released the order? Where are the transparency and accountability measures? author and social activist Sanjukta Basu said.