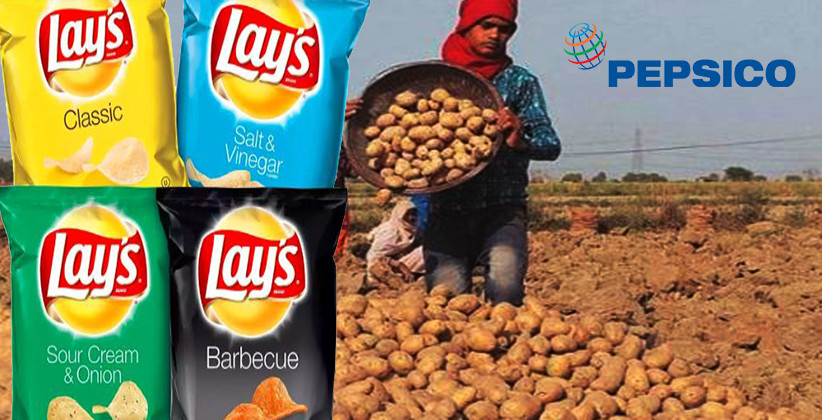 Multi-billion dollar conglomerate PepsiCo has last week sued nine Gujarati farmers, asking them to pay ₹1.05 crore each as damages for ‘infringing its rights’ by growing the potato variety used in its Lays chips.

Following the legal action, the farmers groups have launched a campaign calling for government intervention.

The farmers, who owe about 3-4 acres of land on an average have approached the Protection of Plant Varieties and Farmers’ Rights Authority (PPV&FRA) to make a submission in court on their behalf and fund legal costs through the National Gene Fund.

“These farmers are small, holding around 3-4 acres on an average, and had grown a potato crop from farm-saved seed after they accessed the potato seed locally in 2018,” according to a letter sent to the PPV&FRA by farmers groups.

The farmers group has alleged that PepsiCo hired a private detective agency to pose as potential buyers and take secret video footage, and collect samples from farmers’ fields without disclosing its real intent. PepsiCo then filed suit, the letter said. It added that at least nine farmers in three districts have been charged since 2018.

As per reports, PepsiCo India Holdings Pvt Ltd has told the court that FL 2027 is a variety of potato, which is the hybrid of FL 1867 and the Wischip varieties. PepsiCo uses it for production of the Lays chips. This variety has been commercially used in India since 2009 under the trademark FC5. The company has granted license to a few farmers in Punjab to grow the variety on the buyback system.

On April 9, 2019, an Ahmedabad commercial court judge granted an ex-parte interim injunction against the farmers and appointed a commissioner to prepare an inventory, take samples and send them to a government lab for analysis. Thereafter, the case was posted for hearing on April 26, 2019.

PepsiCo has relied on Section 64 of the Protection of Plant Varieties and Farmers’ Rights (PPV&FR) Act, 2001, to claim infringement of its rights. On the other hand, farmers group has cited Section 39 of the same Act, which states that a farmer is allowed “to save, use, sow, resow, exchange, share or sell his farm produce including seed of a variety protected under this Act” so long as he does not sell “branded seed”.

Farmers group warned that the case could set a precedent for other crops. “These are among the first cases of alleged IPR infringement against farmers in India in a post-WTO world. Wrongly decided, these could set a wrong precedent impacting farmers’ livelihoods quite adversely,” said Badribhai Joshi of the Gujarat Khedut Samaj.