Pradeep Bhandari Writes to Chief Justice of India S A Bodbe Seeking Probe into Arnab Goswami's Transfer to Taloja Jail; Says it is an "Attempts to Silence the Top Journalist" 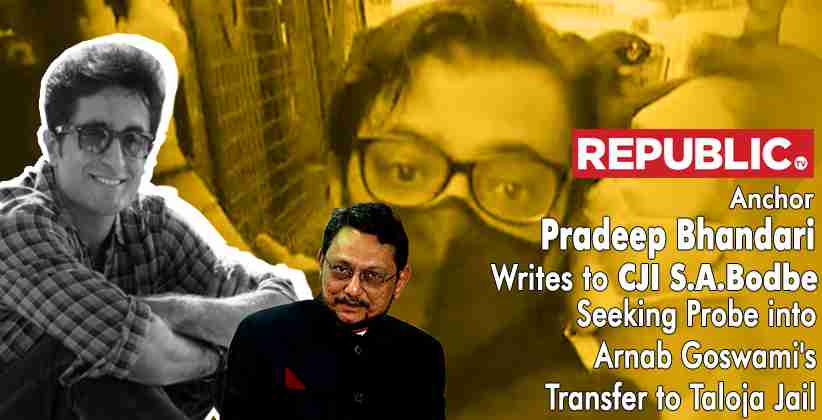 Republic TV Anchor Pradeep Bhandari has written to the Chief Justice of India's essay board seeking enquiry by the National Human Rights Commission on the shifting of Arnab Goswami to Taloja jail. According to the NDTV report, Arnab Goswami was moved to Taloja jail after being found using a mobile phone in judicial custody at a school which is designated as COVID Centre for Alibaug prison.

With respect to this situation, Pradeep Bhandari has written a letter to Chief Justice of India which reads, "In the morning when he came to know this it came as a surprise move the Maharashtra government in shifting Arnab Goswami from Mumbai to Taloja jail on falls pretest without any reason which is Jail full of hardened criminals and Underworld criminals of Mumbai and Maharashtra".

Pradeep Bhandari stated that Arnab Goswami is not being allowed to talk to his advocate or anybody else and that he has somehow managed to say a few words to the Republic media reporter regarding his life being in danger. "He has been beaten up in the morning and is seeking help." We also requested the National Human Rights Commission to immediately take note of this and send a team today itself in Taloja jail and initiate an independent enquiry so that there will be no further harm to Arnab Goswami and also said that his safety and well-being can be assured in jail.

National Human Rights Commission is an independent body which has vested with the power to deal with the cases of human right and decision has a binding effect.

Pradeep Bhandari has stated " I'm praying for immediate action in this matter as it involves human right violation of the countries one of the top journalist which is being harassed and tortured by the Maharashtra state for political reasons."

Arnab Goswami and two others were arrested by Alibaug police on November 4, 2020 in connection with the abetment of suicide case of an architect- interior designer Anvay Nayak and his mother in 2018 for non-payment of dues by the company of the accused.

After his arrest from his Lower Parlance resident in Mumbai, Arnab Goswami was taken into Alibaug police station where the Chief Judicial Magistrate remanded Arnab Goswami and two other to judicial custody till November 18, 2020.

On November 9, 2020 Bombay High Court  rejected the interim bill to Arnab Goswami and said that bail application can be filed under Section 439 Code of Criminal Procedure as regular bail application in Session Court not under extra ordinary jurisdiction of High Court under Article 226 Constitution of India, 1950.

I quote from the decision of DK Basu v. West Bengal (AIR 1997 SC 610)"Custodial torture is a naked violation of human dignity and degradation which destroy, to a very large extent the individual personality it is a calculated assault on human dignity and whenever human dignity is wounded, civilization take a step backward flag of humanity must on each such occasion fly half- mast."