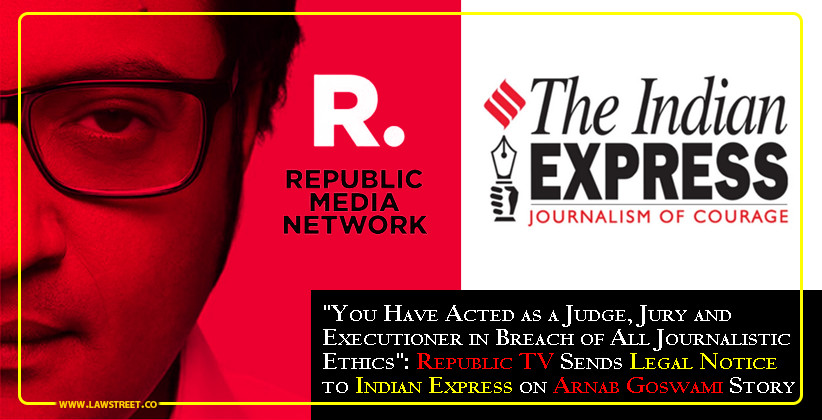 In a legal notice, sent by Republic TV through Phoenix Legal, itwas noted that Indian Express' report titled "Arnab Goswami paid me $12,000 and Rs 40 lakh to fix ratings: Partho Dasgupta" is a vexatious campaign to tarnish the reputation of Republic TV and is intended to further Indian Express' own commercial and corporate interests through sensationalism.

The channel has primarily opposed a news report published by the Indian Express on January 25, 2021 wherein it is claimed that Republic TV's Editor-in-Chief, Arnab Goswami bribed former BARC CEO Partho Dasgupta to raise their TRP rankings.

The Republic TV news channel has sent a legal notice to the Indian Express, asking them to cease and desist from reporting fake and unsubstantiated news against Republic TV in respect of the alleged TRP scam.

"You have acted as a judge, jury and executioner in breach of all journalistic ethics", Arnab Goswami's legal notice to "The Indian Express" stated.

Inter alia, the notice draws attention to several allegations made by Dasgupta's family and his subsequent transfer to JJ Hospital from Taloja Jail, indicating that the alleged confession was made under duress and custodial torture.

Dasgupta on 6 January 2021 before the Sessions Court, Mumbai, clearly stated that there was no manipulation of TRP by the Republic Media Network.

Reference is made to Section 25 of the Indian Evidence Act, 1872 which lays down that a confession made to a police-officer shall never be proved as against a person accused of any offence and under Section 26 it is clear that it is only when a confession is made in the immediate presence of a Magistrate that it may be considered valid.

It was stated that Indian Express deliberately omitted to mention in their report that the above statement was extracted by the Mumbai police from Mr. Dasgupta.

Republic TV has therefore demanded Indian Express to cease from publishing such defamatory reports against them.

"By concealing material facts, pronouncing our client guilty of TRP manipulation, even though the matter is pending investigation and is also sub judice, your assertions amount to criminal contempt of court," the notice stated, while further adding, "The very headline of your news report would mislead any reader into wrongly believing that, as a matter of fact, payments were made by our client, Mr. Dasgupta".

It was further pointed out that investigation of the matter is underway and it is also pending consideration before the Bombay High Court, and that such biased reports are nothing but criminal contempt of Court.

Meanwhile, the Bombay High Court is also set to hear a petition filed by Republic TV challenging the investigation against it.