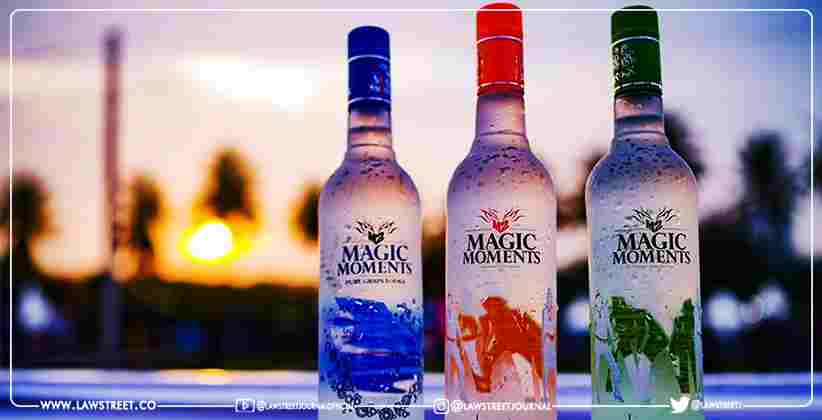 The Delhi High Court has granted ad interim injunction in favour of manufacturer of liquor brand "MAGIC MOMENTS" in a trademark infringement suit against "EVENING MOMENT" mark as being deceptively similar to its registered trademark.

The petition filed by Radico Khaitan Ltd., one of India's top manufacturers and dealers of Indian Made Foreign Liquor (IMFL), with MAGIC MOMENTS as one of its leading products generating significant revenue, was granted by Justice Pratibha M. Singh.

Mr. Bakhru, ld. Counsel appearing for the Plaintiff, submits that the Defendants were initially not injuncted qua whisky as the Defendants had claimed that they had been using the mark for five years, in view of the registration which was in their favour.

He relies on the fact that the word ‘MOMENTS’ is the essential and dominant feature of the Plaintiff’s mark ‘MAGIC MOMENTS’. Owing to the large amount of sales of the Plaintiff and the various registration for the word ‘MOMENTS’ and ‘MAGIC MOMENTS’, etc., the mark deserves to be protected even qua whisky. Also placed reliance on upon the judgments in Shree Nath Heritage Liquor Pvt. Ltd. v. Allied Blenders & Distillers Pvt. Ltd[1]as also in South India Beverages Pvt. Ltd. v. General Mills Marketing Inc.[2]

Also , the Hon’ble Court noted that :

The essential feature of the mark ‘MAGIC MOMENTS’ being ‘MOMENTS’ has also been protected, by the Single Judge order dated 12th October, in Radico Khaitan Limited v. Vintage Distillers Ltd.

The observation of the ld. Single Judge in respect of the adoption of the mark ‘VINTAGE MOMENTS’ by the Defendant therein, is set out below:

“8. Grievance of the plaintiff in the present suit is to the adoption of the mark ‘VINTAGE MOMENTS’ by the defendant who has adopted this mark for the identical goods. Defendant has applied for the impugned trademark ‘VINTAGE MOMENTS’ in Class33 on 26th August, 2020 on proposed to be used basis vide application No.4625185 for alcoholic beverages including Wines, Spirits, Whisky, Rum, Vodka, Gin and Brandy. The said mark has already been objected to by the Trademark Registry. The plaintiff has also screenshared the search on the Trademark Registry which shows that the pre-dominant marks registered with the word ‘MOMENTS’ belongs to the plaintiff and few marks registered otherwise have either been abandoned or are on proposed to be used basis for which, learned counsel for the plaintiff states, that as and when required action would be taken if necessary.

9. Considering the averments in the plaint as also the documents filed therewith the plaintiff has made out a prima facie case in its favour and in case no ad-interim injunction is granted, the plaintiff will suffer and irreparable loss. Balance of convenience also lies in favour of the plaintiff.”

“In the present case too, the words ‘MAGIC MOMENTS’ is an arbitrary word used for the products of the Plaintiff. Considering the overall facts and circumstances, this Court is of the opinion that the marks ‘MAGIC MOMENTS’ and ‘EVENING MOMENT’ are deceptively similar in view of the fact that the essential feature ‘MOMENT’ is being used in toto by the Defendants. The use of the word ‘MOMENT’ in the Defendant’s mark could lead consumers to connect the said product to the Plaintiff. It can be easily perceived that the Defendant’s product is another addition to the Plaintiff’s product-stable. Moreover, the use of the word ‘EVENING’ is not sufficient to distinguish the two products due to the very nature of the product which is usually consumed in evening times. The focus would be on the word ‘MOMENT’ which is the dominant part of the impugned mark”.

13. Accordingly, the Defendants and all others acting for or on their behalf, are restrained from using the mark ‘EVENING MOMENT’ or any other mark consisting of the word ‘MOMENT/MOMENTS’ in respect of any alcoholic beverages manufactured, sold or offered by sale by them.

14. Interim order shall operate during the pendency of the present suit. Application seeking interim injunction being I.A. 4356/2021 is disposed of in the above terms.[3]

Zomato, Swiggy Down: Users Report Outage As Many Unable To Order