Home Business WhatsApp sues the Indian government, claiming that new IT laws would put an end to privacy
Business 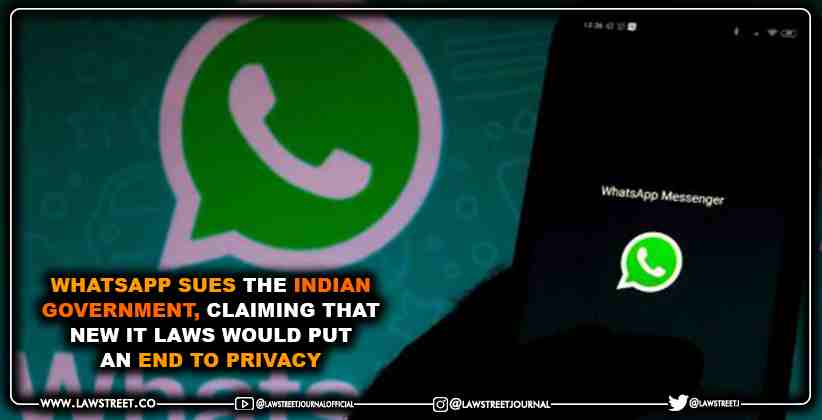 According to reports, WhatsApp has filed a lawsuit against the Indian government in Delhi, arguing that legislation slated to take effect on Wednesday ( May 26, 2021) will force Facebook's messaging app to break privacy standards.

It urges the Delhi High Court to declare that one of the new IT laws violates India's constitution by compelling social media platforms to identify the "original producer of data" when authorities demand it.

The WhatsApp case adds fuel to a simmering conflict between Prime Minister Narendra Modi's government and Internet behemoths like Facebook, Alphabet's parent firm Alphabet, and Twitter. Tensions erupted this week when authorities raided Twitter's offices. According to the microblogging service, posts from a spokeswoman for India's governing party and others were labelled as containing "manipulated media" with counterfeit content inserted.

New Delhi has also pressed internet companies to remove "misinformation" on the COVID-19 outbreak that is ravaging India, as well as some criticism of the government's response to the crisis, which is claiming the lives of thousands of people every day.

While the new law requires WhatsApp, which has a half-billion Indian users, to identify persons who have been credibly accused of wrongdoing, it also stipulates that it cannot do so on its own.

Because WhatsApp chats are encrypted end-to-end, it would have to breach encryption for both receivers and senders to comply with the new legislation, according to the company. Due to the sensitivity of the matter, sources familiar with the complaint declined to be identified.

According to a government official, WhatsApp could find a way to track out the originators of disinformation, which has long been a policy of Prime Minister Narendra Modi's government, and the company was not asked to break encryption.

WhatsApp indicated that it will continue to cooperate with authorities.  India's technology ministry did not respond to a request for comment.

Many Indians have started using alternative messaging apps like as Signal and Telegram after WhatsApp announced a new privacy policy earlier this year that allows it to share some data with Facebook and other major organisations. While the downloads of Signal and Telegram have increased in India, no app has the same user base as WhatsApp. India has yet to get a response to its request for traceability.

There has been a lot of speculation about how firms will react to the new restrictions since they were revealed in February, 90 days before they were supposed to take effect.

Facebook has declared that it agrees with the most of the restrictions, but that it is working on some of them at the moment. Twitter has declined to comment after being criticised for failing to delete remarks from government opponents. Some in the business are asking for a delay in the implementation of the new legislation until these concerns are addressed.

The WhatsApp lawsuit, according to people familiar with the situation, references a 2017 Indian Supreme Court decision in favour of privacy in a case known as the Puttaswamy judgement.

According to the court, privacy must be preserved unless law, need, and proportionality all weigh against it. According to WhatsApp, the proposed law fails to meet all of these standards, starting with the lack of strong legislative backing. Experts have corroborated WhatsApp's assertions.

A popular social media intermediary in India is one with five million registered members. It has mandated the appointment of a resident grievance officer, chief compliance officer, and nodal contact person, as well as the posting of the names and physical contact details of these executives on their website.

WhatsApp's parent company, Facebook, as well as industry rivals, have all made significant investments in India. On the other side, industry executives privately worry that the Modi government's tightening rules may endanger their future. Big social media companies must now recruit Indian nationals to key compliance roles, delete information within 36 hours of a judicial order, and build up a structure to respond to complaints, according to the new rules.