Hate Crime: Is It The New Normal In India? 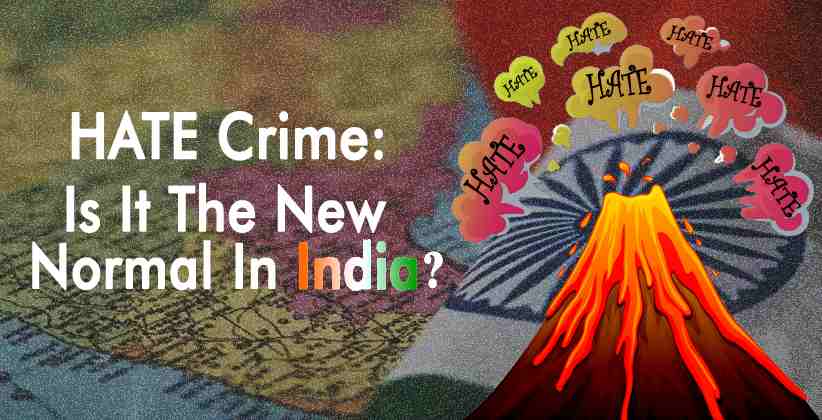 Hate crime has been a concerning issue in recent times wherein the victimization of the minorities is pervasive and extremely atrocious. The issue needs to be tackled with utmost seriousness but no significant efforts have been made yet by the government of India to prevent such activities from taking place. This article makes an attempt to draw special attention towards the issue of hate crime and projects the recent data regarding its incidents in India.  The lawmakers have overlooked the crucial need to legislate laws curbing the recurrence of such reprehensible crime and it is high time now that the measures should be taken to completely eradicate the problem. In addition to this, it also endeavours to recommend measures that can be taken up by the government and society as a whole to deal with the problem of hate crime.

INTRODUCTION A peaceful and harmonious life is a basic human right of every individual. It is an indispensable element for a person’s basic survival and empowerment which is bestowed by practically all nations of the world. Even the Constitution of India in its various provisions provides protection against discrimination and brutality towards the Indian citizens. These provisions simply furnish the fact that the amicable and violence-free life is of utmost importance for the subsistence of living beings. Unfortunately, in this day and age, there has been an upsurge in hate crimes against minority communities and marginalised groups. The dictionary meaning of ‘hate crime’ is a crime which is usually violent and motivated by prejudice or intolerance towards an individual’s national origin, race, religion, gender or sexual orientation.Incidents of such hate crime may involve physical assault, property damage, harassment or verbal abuse. Crimes that result out of hatred towards any particular group of individuals are global in nature and are not a new phenomenon.     POSITION IN INDIA Several incidents of bias crime account for the fact that even the Indian society has been severely plagued with ethnic hatred and discrimination. Sadly, India’s National Crime Records Bureau has not published any data regarding hate crime due to the lack of laws dealing with it. However, in the absence of any official data, news content and statistical analysis by various independent organisations have proven to be important sources concerning such crimes. According to Amnesty International India’s recent data reports, there has been a dramatic escalation in the occurrence of mob violence in the last few years. Since the year 2015 to 2019, incidents of hate crime that have been documented have reached the count 902 and are still increasing by the day.  As per the reports, Dalits are the most targeted community by the hate mongers and since 2015 more than 600 incidents have been cited where the members of the said community have been subjected to humiliation and subjugation, brutally beaten by the people belonging to upper castes, denied access to public spaces and are socially boycotted. Furthermore, the second most affected community of the hate crime is Muslims. In 2019, more than 40 incidents have been cited where Muslims were targeted mostly on the speculation of storing or eating beef by the ‘so-called cow protectors’ or solely owing to the fact that they were Muslims.  Moreover, from September 2015 to June 2019, records show that there have been 621 caste-based incidents, 274 gender-related incidents, 217 religion-related incidents, 113 cow-vigilantism related incidents, 32 violent incidents against Adivasi and 31 honour killings.   THE STATE OF LAW It goes without saying that such hate crimes are highly discriminatory in nature and violate a person’s right to life, right to integrity, the right to be free from torture and ill-treatment among many others. India is a party to several international human rights treaties and thus, it it is it's prime obligation to enact such laws that deal with the deep-rooted hate and ensure prevention of these horrific acts arising in the future. Although there are quite a few provisions in the Indian Penal Code which make hate crime punishable but they are rather shambolic and not ideally known to the concerned authorities. For instance, Section 153(A) of Indian Penal Code, 1860 (IPC) provides punishment of three years imprisonment or fine or both to any person who is responsible for disturbing the public tranquility and harmony between communities with such words or actions that promote enmity towards a particular religion, language, caste or any other ground.Similarly, Section 295 of the IPC provides punishment of up to three years imprisonment or fine or both to any person who deliberately outrages or insults the religious beliefs of any community by words, signs or otherwise. Moreover, in Tehseen S. Poonawalla v. Union of India & ors, the Supreme Court of India laid down certain guidelines for preventing the growing incidents of lynching where every state government was ordered to designate a senior police officer to prevent and take prompt action against the mob violence and set up fast track court in such cases. Unfortunately, the aforesaid orders of the Supreme Court have not been comprehensively complied with by any state and till date, there have been hardly any befitting efforts to curb this heinous menace. Codifying hate crime is the utmost necessity of the present times to ensure justice and also to provide a safeguard to marginalized communities by apprehending any discriminatory act against them. In addition to this, it should also be noted that there exists a collective responsibility of every organ of the government to deal with the bias crime in an appropriate manner.  Firstly, the police officials and administrators should be sternly directed to take necessary steps for the prevention of the said crime. Secondly, the duty also lies on the political parties to suspend such members who indulge in the practice of hate speech and incite people against any particular community. Thirdly, the publication of hateful comments and threats against any community on print and social media should also be closely monitored. Lastly, the common citizens should also make suitable efforts in creating awareness against the hate crime and that it is imperative to eradicate this evil from the society.    CONCLUSION All things considered, it can be rightly said that in a country like India where there are diverse religions and cultures, hate crime can create an atmosphere of disaffection among various groups which could further damage the living conditions. Thus, the lawmakers need to perceive that there is an urgent requirement for the formulation of laws that are deterrent to such activities and guarantee the protection of the core values and fundamental rights enshrined in the Constitution of India.   [Disclaimer: The views expressed are solely of the author and they do not purport to reflect the opinion or views of LawStreet Journal]