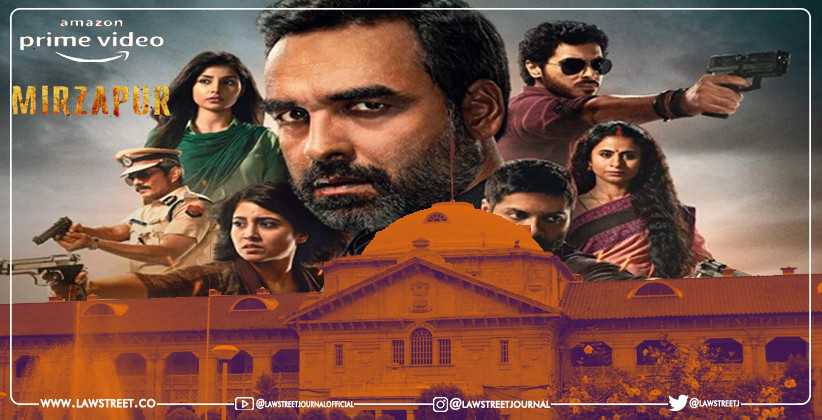 CelebStreet Feb 20, 2021 Namya Bose ( Editor: Ekta Joshi ) 7 Shares
7 Shares
The bench of Justice Pritinker Diwakar and Justice Deepak Verma of the Allahabad High Court granted a notice for the protection and stay on the arrest of the directors and writers of the popular Amazon Prime web series ‘Mirzapur’ in the matter of Karan Anshuman & Ors. v. State of UP.

The accused persons approached the High Court pleading to do away with the accusations of the FIR filed against them on January 17, 2021 by a resident of the town of Mirzapur.  The complaint was lodged by Arvind Chaturvedi who claims that most of the content of the mentioned web series depicts a wrong image of the town of Mirzapur, portraying it as anti-social, crime infested, promoting illicit relations and casteism.

The FIR stated that “the portrayal of the town of Mirzapur in such a manner is far away from the reality of life in Mirzapur and thereby has hurt sentiments and some friends have started calling me ‘Kaaleen Bhaiya’ who is the antagonist in the series and is involved in various illegal activities.

Karan Anshuman, Gurmeet Singh, Puneet Krishna & Vineet Krishna, the petitioners, were quick to jump to defence arguing that the series was a mere ‘work of fiction’ and the required disclaimer was given at the beginning of the each episode that states “the said Series respects all faiths and religions and that all places and events in the said Series are completely fictional.”  Another defence put forth by the petitions was the fact that only after the release of the first season in 2018 was a success did they decide to launch the second season in 2020 after 3 months of which the relevant FIR was filed.

The main argument remaining that the web-series ‘Mirzapur’ was a work of art, a fictional creation and should be appreciated in the artistic light as allowed under the provision of Article 19(1)(a) and (g).

Moreover, they say this lodging of the FIR as a cheap publicity stunt to seek political favours from the ruling party, the plea stating “ By lodging the impugned FIR the first informant is trying to score political mileage and the fact that the State government is hand in gloves with the first informant is evident from the fact that the FIR was lodged on 17.01.2021 and in a span of four days, on 20.01.2021, a team of police officers were rushed to Mumbai to investigate the matter. Such a quick response in such a frivolous case clearly shows that the respondent no.1 (State of Uttar Pradesh) is equally complicit as far as the lodging of the impugned FIR is concerned."  The court was requested to throw out the case at hand quashing the crimes of section 295-A, 504, 505, 34 IPC and 67A of the I.T. Act, 2005 as mentioned in the FIR. A stay order was granted to the producers of the show as well namely Farhan Akhtar and Ritesh Sidhwani. However, another plea was made by Sujeet Kumar Singh , another resident of Mirzapur, to the Supreme Court requesting ban of the entire web-series. This plea seeks banning of the sequal , Mirzapur 2, stating,