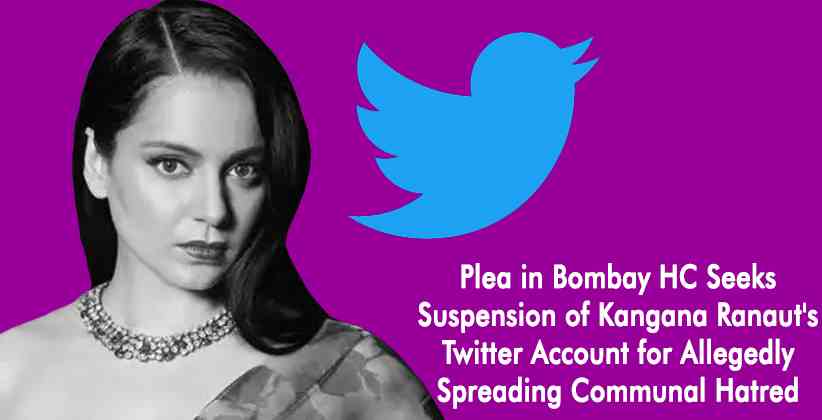 CelebStreet Dec 05, 2020 Samit Siddhanta ( Editor: Ekta Joshi ) 4 Shares
4 Shares
After some tweets were made by Kangana Ranaut, an advocate has filed a petition against the actress seeking permanent suspension of her twitter accounts for allegedly spreading communal hatred.

The lawyer from Mumbai filed the writ petition before Bombay High Court  against Kangana Ranaut asking for permanent submission of her twitter account for allegedly spreading hatred, disharmony in the country as some of her tweets portray attempts to divide the country. She continuously spreads hate through her tweets. Her tweets are derogatory and could influence and provoke people for doing wrong, he alleged. The advocate has previously filed  two criminal complaints against the actor and one of them also consists of her sister Rangoli Chandel as an accused.

While considering these complaints, in October, the magistrate court at Bandra ordered to file an FIR against the actor and her sister for allegedly spreading disharmony in the society and the Andheri Magistrate court ordered enquiry against the actor and her sister for allegedly posting tweets which spread hates and those are derogatory and completely against Muslim Community. Advocate Ali Kaashif Khan Deshmukh, the petitioner had also written to Advocate General of Maharashtra AA Kumbhakoni asking for his consent to initiate contempt proceeding against the actor in Bombay High Court for her two tweets which are completely against society and spread hatred. The petition points out her sister Rangoli Chandel’s abusive tweet dated 15 April, 2020 which stated that Tablighi jamaat members should be shot dead. This tweet lead to suspension of her twitter account as she got massive outrage but Kangna supported her sister's tweet and even posted the video for the same and called Tablighi Jamaat attendees as terrorists. Moreover the petition stated that it already evident from the prima facie facts that responded no. 1 (Kangana Ranaut) has no respect for varied communities of India. She has no respect for law of land, authorized government bodies and shamelessly she has even made fun of judiciary as after the above order and after the above order of the Magistrate court at Bandra, Mumbai she still did not stop and yet again posted tweets which disturb the decorum of society spread disharmony. The petitioner also averred that twitter does not have its own guidelines and policies. Moreover as per Rules 3(11) of the Information Technology (Intermediaries Guidelines) Rules 2011, Twitter being a social media which is a giant platform and as per Section 2(w) of the IT Act, 200 is supposed to redress complaints within one month from the date of receipt, the petition states.