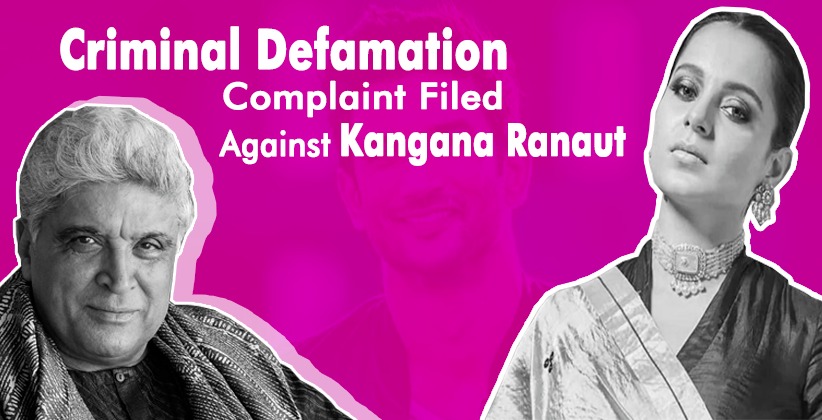 Lyricist and poet Javed Akhtar has filed a criminal defamation complaint against actor Kangana Ranaut as she drags his name into the death of actor Shushant Singh Rajput. The criminal defamation complaint has been filed before the Metropolitan Magistrate Court at Andheri under Section 499 (Defamation) and Section 500 (punishment for defamation) of Indian Penal Code, 1860 and Section 200 (examination of the Complaint) Code of Criminal Procedure,1973. The Magistrate has taken cognizance of the Criminal Defamation case of Javed Akhtar by virtue of Section 190(1)( upon receiving complaint of facts which constitute the offence) of  Code of Criminal Procedure,1973.

According to the complaint Kangana gave an interview to republic TV and she alleged that the Hindi film industry is run by the “Mafia”and that “Mafia” named as Mahesh Bhatt and Javed Akhtar as a people who are a part of this Mafia. She further stated that "Then there are Javed Akhtar and company who are so called atheists but their whole group is about keeping an eye on who is Islam friendly and who is not Islam friendly".

The complainant has alleged that the videos of the interview on republic TV have been watched by millions of people on YouTube alone which is damaging the reputation of the complainant in the society. The complaint has been filed on November 2, 2020 and it is scheduled to be heard on December 3, 2020.

The actress Kangana Ranaut there is several cases filed against her for her tweets as well as remark made on other media platforms. The Bandra court has ordered registration of FIR against her last month for tweets alleging promoting religious disharmony between Hindu and Muslims.  A Mumbai based lawyer file two separate complaint against her for the tweet against the Judiciary and also the tweet against promoting the communal divide which lead the Andheri Court to start an enquiry against the Kangana Ranaut and her sister Rangoli Chandel.

Even in a court of Judicial Magistrate 1st Class in Karnataka order registration of FIR against Kangana Ranaut for her tweet made on September 21,2020 against the farmer protesting against the Farmers Bills.

With the advent of internet age the convenience in communication has increased tremendously. But with this there is increase in posting online content which is even defamatory. Social media defamation case has been increasing day by day there is need of amendment in Laws to deal with this type of cases.