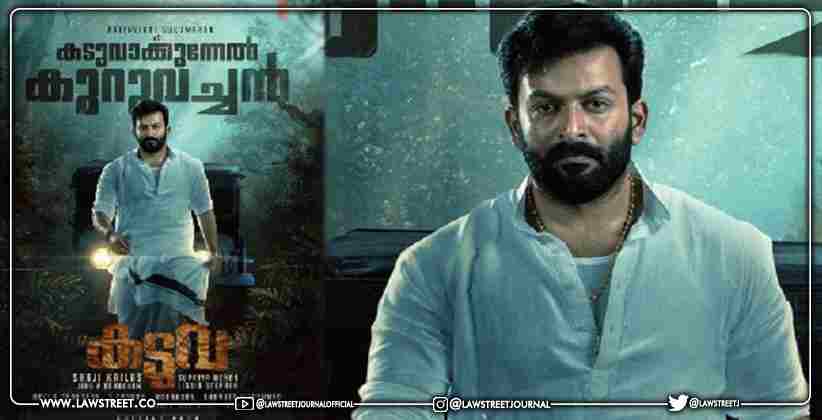 The Second Additional Sub Judge of Ernakulam Court recently issued an ad interim injunction in a suit challenging the release of Prithviraj-starrer Kaduva restraining the respondents from publishing the movie until further orders.

The court found that if it was broadcasted or screened even for a moment, it would cause irreparable injury and hardships to the plaintiff.

The plaintiff's family 'Kuruvinakkunnel' is a very prominent family in Pala and he is known to a lot of people in the area as a planter and a businessman. His dispute with an IPS officer Joseph Thomas relating to a musical instrument donated to the parish church were well-known tales as well.

When the legal battle settled down, following points were laid down, and the plaintiff was approached by film director Renji Panicker with a proposal to base a movie on his life story.

Meanwhile, Listin Stephen announced the production of a motion picture titled 'Kaduva' based on the screenplay 'Kaduvakunnel Kuruvachan' written by Jinu Varghese Abraham. He also learned that the protagonist in this script also bore the name 'Kaduvakunnel Kuruvachan' and was to be played by the actor Prithviraj Sukumaran. It was further confirmed that the movie was based on the plaintiff's life.

The plaintiff was angry as in the movie he was portrayed as a degenerate man, with no respect of law almost like a local thug who takes the law in its own hands to settle personal scores. Contrary to what is demonstrated in the movie, the plaintiff did not have connections with any criminal. He never resorted to any criminal act to settle scores and no criminal case was ever filed against him.

He alleged that since the character 'Kaduvakkunel Kuruvachan' is depicted in the screenplay and movie as an aggressive hooligan who has no respect for law, the plaintiff would be defamed and his reputation would be seriously injured if they are allowed to be published.

Satisfied that the plaintiff established a prima facie case, the sub court found it just and proper to grant an ad interim injunction restraining the respondents, their men or agents from publishing the screenplay of the movie, or even releasing the movie in full or in parts including trailers, teasers or songs in theatres or any other media.