It was one of the main grounds on which Showik’s bail plea had been rejected in the past, keeping him in jail for almost three months.  Showik Chakraborty was arrested by the NCB on September 4 in the drugs case that the Narcotics Control Bureau (NCB) is investigating in connection with actor Sushant Singh Rajput’s death. He was accused of procuring ganja for Shushant Singh Rajput, who was in a relationship with his sister Rhea before his death in June. In a detailed order, special judge G B Gurao said: “The court has to see that there are reasonable grounds for believing that accused is not guilty. The ingredient of Section 27A of NDPS Act are absent in the case of applicant.” The judge also relied on the Bombay high court order granting bail to Rhea on October 7. In that order, on the point of applicability of Section 27A, the court had held that 'Helping procure drugs for Sushant not same as harbouring and financing drugs'. It further held that simply providing money for a particular transaction or other transactions would not be financing of that activity. “Financing will have to be interpreted to mean to provide funds for either making that particular activity operational or for sustaining it. It is the financial support which directly or indirectly is cause of existence of such illicit traffic. The word ‘financing’ would necessarily refer to some activities involving illegal trade or business,” the high court had said. The special NDPS court said that investigations had revealed that Showik Chakraborty was not concerned with the seizure of “commercial quantity” of drugs from co-accused Anuj Keshwani. Further the court said that “the seizure of contraband from accused Anuj Keshwani is an independent recovery. The court also pointed out the statement of the prosecution therein prosecution stated that no drugs were recovered from Showik Chakraborty. The court observed that Showik Chakraborty was arrested merely on the basis of   statements of the co-accused and his own statement.  While considering Showik’s bail plea, the judge also referred to the latest Supreme Court ruling in which it was held that statements made to NCB officers cannot be used as a confessional statement in the trial of an offence or to convict an accused under the NDPS Act, 1985. The court found that the ratio laid down in the Supreme Court ruling is squarely applicable to the Showik Chakraborty case, because applicant is arrested merely on the grounds of confessional statement of co-accused and his statement. Further, the investigation in respect of the applicant is also completed. On September 11, 2020, the same court had rejected his first plea for bail. Almost a month later, the Bombay high court, too, rejected Showik’s bail plea. In November, once again he sought bail from the NDPS court. During the arguments of the bail plea, his lawyers, Ayaz Khan and Abad Ponda, cited the recent Supreme Court ruling. While granting bail in view of the facts and circumstance of the case the Special Court considered the following factors: 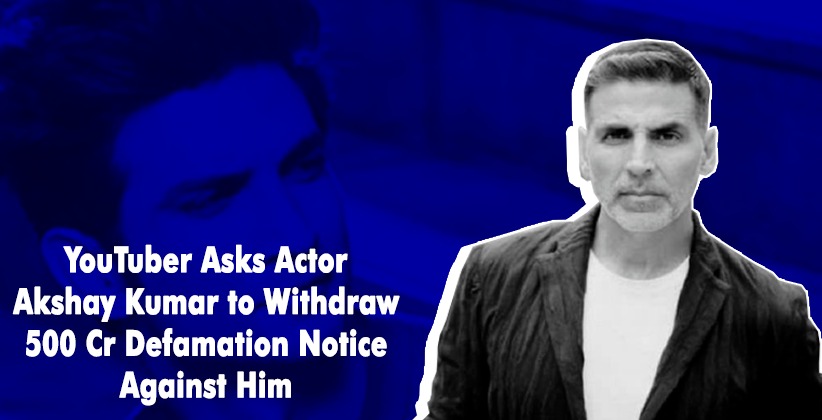 CelebStreet Nov 23, 2020 Richa Shah ( Editor: Ekta Joshi ) 11 Shares
11 Shares
A 25 year-old YouTuber, Rizwan Siddique who was served a defamation notice of Rs.500 Crore by actor Akshay Kumar for posting content making allegations relating to the actor in the Sushant Singh Rajput Death case has replied to the same, denying all allegations. In addition to this, he also asked the actor to withdraw the said notice stating that it is based on a flawed premise.The YouTuber said that much of the content posted on his channel that was against Akshay Kumar was already in...
Read full post