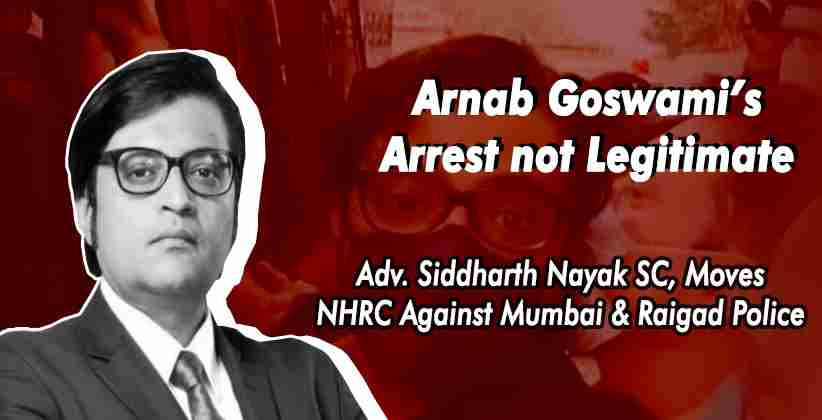 In the petition, the lawyer has alleged that Arnab Goswami was arrested without warrant in a case which was closed in 2018. The petition states Raigad Police in operation with Mumbai police had threatened encounter Arnab Goswami and they were carrying AK-47 assault rifles while going to his house to arrest him.

Advocate Siddharth Nayak has appealed before the National Human Rights Commission (NHRC) to take cognizance of the matter and take action against the police officials for violation of human rights of Arnab Goswami who is also one of the top journalists of the country. The Mumbai police had arrested Republic TV  Arnab Goswami from his house in relation to a 2018 abetment to suicide case which was already closed by the police saying there was no evidence of the allegations. The investigation in the case has been reopened by Alibaug police on the directions of Maharashtra Home Minister Anil Deshmukh.  In May 2018, an FIR was filed against Arnab Goswami in an alleged abetment to suicide case named Anvay Naik. An Interior Designer named Anvay Naik had committed suicide in his bungalow in Alibaug in his suicide note Anvay Naik claimed Goswami and the other two persons Feroz Shaikh and Niteish Sarda owed him a total of Rs 5.4 crore.   On this matter Republic TV has said in a statement  that it has paid 90 percent of the dues to deceased Anvay Naik’s company Concorde Designs Pvt. Ltd. (CDPL) over two years ago and that the remaining amount was to be paid on the completion of the pending work that has not been undertaken ever since.  The statement further said that ARG Outlier media Pvt Ltd, the company that owns Republic TV, had made several attempts for complete and final settlement of all claims but the absence of shareholders or directors in CDPL rendered the attempts unsuccessful.