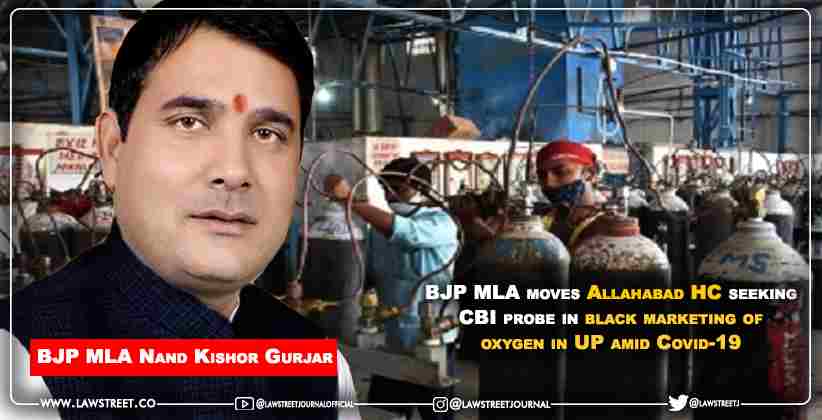 Recently, BJP MLA Nand Kishor Gurjar from Loni constituency in Uttar Pradesh moved the Allahabad High Court seeking a CBI probe into the black marketing and illegal sale of oxygen in the state.

Illegal sale of oxygen has resulted in the death of scores of covid-19 patient in Uttar Pradesh.

The petitioner alleged Ghaziabad additional district magistrate (ADM) Shailendra Kumar Singh,who is in charge of oxygen distribution in the city, has been illegally black marketing oxygen supply from Ghaziabad to nearby cities like Delhi, Haryana etc. The petitioner furnished multiple audios and video clips before the court, allegedly showing the ADM’s complicity in the case.

The BJP MLA’s move is significant, as it is completely in contrast to the assertion of CM Yogi Adityanath that there is no dearth of oxygen in the state.

The petitioner lamented that ADM had not made even a single oxygen cylinder available in the hospital situated in his constituency for the last several days. He has not shown his concern even to a single request made to him.

It has been stated that the Ghaziabad has several oxygen plants which will be enough to sustain and fulfill the entire oxygen demand of the city.

The MLA submitted quoting the Allahabad High Court in the case of in- Re inhuman condition at Quarantine centre and for providing better treatment to Corona positive- ‘Death of covid patient just for non supplying of oxygen to the hospital is a criminal act and not less than a genocide by those who have been entrusted the task to ensure continuous procurement and supply chain of liquid medical oxygen.’

One more letter stating the oxygen shortage in Uttar Pradesh, addressed by another BJP MLA Yogi Adityanath was referred to in the case by the petitioner.

The BJP MLA alleged that these malpractices were violating the fundamental rights under article 14,19 and 21 of the Indian Constitution.

It was demanded that the judicial officer or retired High Court Judges must keep a check on the production, supply and ultimate distribution of the oxygen in the Ghaziabad in real-time and file status report before the court.

Further, directions to the state government for formulation of complete plan regarding the distribution of compensation to the families of Covid-19 patients who died due to oxygen shortage were also sought.