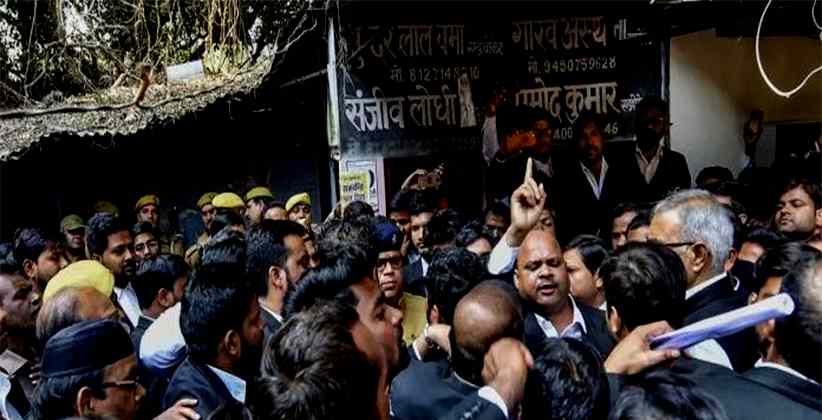 Crime, Police And Law Feb 14, 2020 Lawstreet News Network 19 Shares
19 Shares
A bomb explosion took place at a Lucknow Courton 13th February 2020, Thursday around 12:30pm. The explosion took place near the Lucknow Collectorate in Hazratganj, close to the District Magistrate’s Office and hardly a kilometre from Uttar Pradesh Vidhan Sabha. One person has been reported to be seriously injured while the other two were lucky and received only minor injuries.According to locals, the blast was a result of a dispute between two groups of lawyers over a complaint. The bomb blast is believed to be an attempt to attack a lawyer present in the court.  Lucknow Bar Association Joint Secretary Sanjiv Kumar Lodhi claimed that he was the target of the attack because he had been complaining about a few judicial officers. He said about 10 people hurled crude bombs outside his chamber in which he and two other lawyers were injured. "One bomb exploded but two still lay unexploded," he said, questioning the security on the premises. Bomb disposal and dog squads have reached the site of the blast.  The Lucknow Police has commenced inquiries. It is indicated that the bomb blast may have been related to the election to the Avadh Bar Association. The elections concluded on February 11 and results were announced day before yesterday (February 12).Sanjiv Kumar Lodhi has claimed that his opponent Jeetu Yadav had conspired and attacked him with the crude bombs. Mr. Lodhi questioned the security on the premises of the collectorate, which houses the district courts. Lodhi has also reportedly demanded Police Protection. Speaking to the media, Lodhi said that along with Yadav, two others - Ejaz and Ajam, who do not practice before Lucknow Courts - hurled bombs towards him and ran away from the scene.  The police have identified the bomber as one Jeetu Yadav. The bomb used was a locally made explosive device.  The Wazirganj police are on the spot and are probing the incident. So far, the police has recovered 3 more live bombs from the scene. Joint Police Commissioner Naveen Arora said Lodhi has filed a complaint against the Bar Association’s general secretary Jeetu Yadav and three others, alleging that he was attacked with crude “sutli” bombs. “Two live sutli bombs have been recovered from the site. In the investigations so far, no one has heard the sound of bomb blast and Sanjeev Kumar Lodhi has also not suffered any injury,” Mr. Arora said. “Investigations are on and prima facie it appears to be a case of mutual rivalry between two groups of lawyers,” he added. He said security at the collectorate and the district courts will be reviewed and further strengthened. Former Bar Association office bearer J.P. Singh said a meeting of the body was held soon after the incident but rival groups clashed there. Senior lawyers intervened to bring the situation under control, he said. As the news of an explosion spread, lawyers gathered and raised slogans demanding better security in the court complex. They also blocked traffic outside the court compound demanding the immediate arrest of those responsible. In a tweet, Congress general secretary Priyanka Gandhi said, “The U.P. government should now clearly state that it lied to the public for three years. Actually, the state is dominated by criminals.” “In the capital, lawyers are being attacked with bombs in the court. From the capital to remote regions, nobody is safe, she tweeted in Hindi.  Just last month, lawyers struck work in protest against the recent attacks on them in the state.  After the explosion, the court erupted into chaos. Scores of angry lawyers crowded the area following the incident. The Bar Council of Uttar Pradesh had asked bar associations to abstain from work to put pressure on the government to pass legislation to protect lawyers. Incidents of violence within court premises of Uttar Pradesh have been reported in the recent past. In June 2019, UP Bar Council Chairperson Advocate Dharvesh Yadav was shot dead in the premises of Agra Civil Court. She was shot by another lawyer named Manish Sharma. After the attack, he fired a shot at himself after the attack, and succumbed to those injuries few days later.  In March 2019, a lawyer was shot dead in a court campus in Basti district.  On January 7, lawyer Shekhar Tripathi (32) was beaten to death with sticks by five men in Lucknow, triggering anger among his colleagues who sat with the body at the district collectorate demanding justice. On December 17, a man was killed and two policemen injured when unidentified assailants opened fire at Bijnore CJM's court. A PIL seeking enhanced security measures for lawyers in courts across the country is pending in the Supreme Court.   Author – Devansh Dev