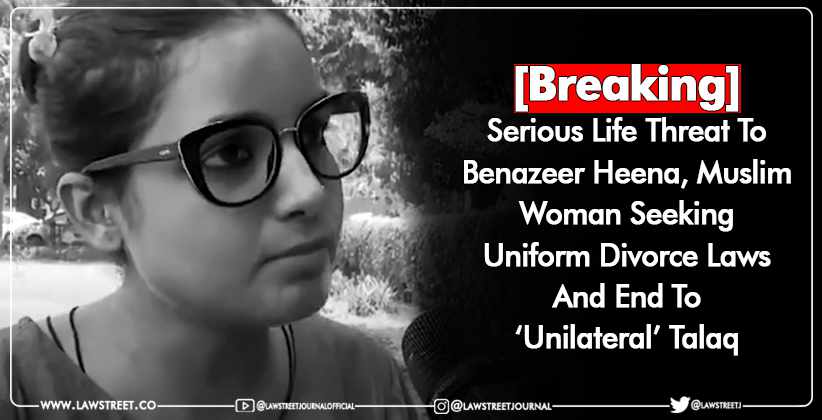 Benazeer Heena, a Muslim woman journalist who moved the Supreme Court with a plea challenging the practice of Talaq-e-Hasan, by which a Muslim man can divorce his wife by saying the word "talaq" once a month, for three months [Benazeer Heena v. Union of India & Ors] is now receiving serious death threats from unknown persons.

Two men were seen following the petitioner at night and were found interrogating about her address from her neighbors.

Further, two women, allegedly from Child Welfare Association were also found interrogating about the address of the parents of the Muslim woman/petitioner. However upon asking about their purpose or any official document to show they were from Child Welfare Association, the two ladies refused to disclose anything and neither did they possess any official document/ID Card.

In the meantime, Benazeer has filed a police complaint against people threatening her to endanger her life.

The Public Interest Litigation (PIL) filed by journalist Benazeer Heena, seeks a declaration that the practice of Talaq-e-Hasan is unconstitutional as it is irrational, arbitrary and violative of Articles 14, 15, 21 and 25 of the Constitution.

The PIL also seeks guidelines on a gender and religion neutral procedure and grounds for divorce.

The petitioner's husband had allegedly divorced her by sending a Talaq-e-Hasan notice through a lawyer, after her family refused to pay dowry, even as her in-laws were harassing her for the same.

While pointing out several instances of being mistreated and beaten at the hands of the husband and his family, the petitioner stated that she had even submitted a complaint to the Delhi Commission for Women and lodged a First Information Report (FIR). However, the police allegedly told her that the practice is permissible under Sharia law.

Terming the practice as "Unilateral Extra-Judicial Talaq", the plea states that banning it is the need of the hour, as it is not harmonious with human rights and equality and is not necessary in the Islamic faith.

Many Islamic nations have restricted such practice, while it continues to vex the Indian society in general and Muslim women like the Petitioner in particular. It is submitted that the practice also wreaks havoc to lives of many women and their children, especially those belonging to the weaker economic sections of the society," the plea stated.

It is contended that the practice is misused and since only men can exercise the same, it is discriminatory as well.

Arguing that the legislature can amend and repeal laws in matters governed by personal laws till Independence, it is submitted,

"The Constitution neither grants any absolute protection to the personal law of any community that is arbitrary or unjust, nor exempts personal laws from the jurisdiction of the Legislature or the Judiciary."

The freedom of conscience, profession, practice and propagation of religion as guaranteed by Article 25, is not absolute, the petitioner further argued.

On these, among other grounds, the petitioner has sought the following prayers:

Direct and declare the practice of “Talaq-E-Hasan and all other forms of unilateral extra-judicial talaq” is void and unconstitutional for being arbitrary, irrational and violative of Articles 14, 15, 21, 25;

direct and declare Section 2 of the Muslim Personal Law (Shariat) Application Act, 1937 is void and unconstitutional for being violative of Articles 14, 15, 21, 25, in so far as it validates the practice of “Talaq-E-Hasan and other forms of unilateral extra-judicial talaq”;

Direct and declare the Dissolution of Muslim Marriages Act, 1939, is void and unconstitutional for being violative of Articles 14, 15, 21, 25 in so far as it fails to secure for Muslim women the protection from “Talaq-E-Hasan and other forms of unilateral extra-judicial talaq”;

Direct Centre to frame guideline for Gender Neutral Religion Neutral Uniform Grounds of Divorce & Uniform Procedure of Divorce for all.