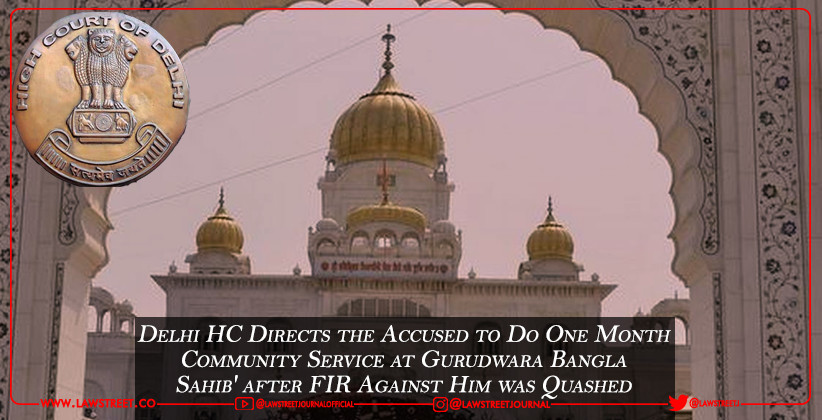 Crime, Police And Law Mar 17, 2021 Tanya Sehrawat ( Editor: Ekta Joshi ) 6 Shares
6 Shares
A 21 year old accused has been directed by the Delhi High Court to do community service at Gurudwara Bangla Sahib for a month after the FIR against him was quashed as the parties had arrived at a compromise. He is supposed to the same between March 16 – April 16, 2021.

The matter was heard by a single Judge Bench of Justice Subramonium Prasad who imposed a penalty of Rs 1 lakh on the youngster for not being able to control his anger along with taking law in his own hands.

The court said, “The youngster must learn to control his anger and keep in mind that he cannot take law in his hands. The petitioner is directed to do one month community service at Gurdwara Bangla Sahib from 16.03.2021 to 16.04.2021."

The youth was booked under Sec 307 which is attempt to murder as he had allegedly slapped the complainant along with stabbing him in the stomach. However, the matter was soon settled between the parties with the involvement of the parents and well-wishers. Following this, a petition under Sec 482, CrPC for quashing the FIR that was filed. Then, a settlement deed was also presented before the court. It was dated October 26, 2020.  In this regard, the court observed:

“Keeping in mind the fact that the accused is a 21 year old youngster having entire life ahead of him and the fact that the parties have entered into a ettlement, this Court is inclined to exercise its jurisdiction under Section 482 Cr.P.C to quash the FIR on the ground that the parties have entered into a compromise. The petitioner, who is appearing in person along with his counsel, is warned not to indulge in such activities and repeat the offence in future.”

Lastly, the court said that a certificate from Gurudwara Bangla Sahib is supposed to be filed after the youngster completes the one month community service there.