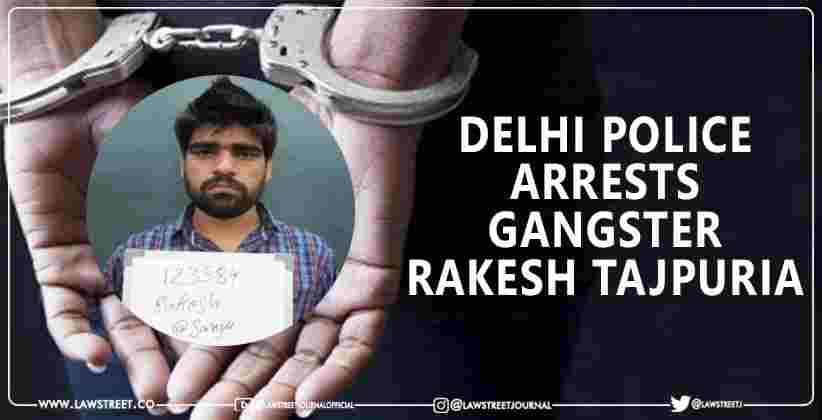 Delhi Police arrested gangster Rakesh Tajpuria from Narela after a brief encounter on Tuesday night in connection with the Rohini courtroom shootout. The Special Cell said Tajpuria, who had been absconding for months, had provided the weapons that were used by assailants to gun down gangster Jitender Gogi inside Delhi's Rohini court.

On September 24 2021, in Delhi's Rohini Court promises, three people died, including in-custody gangster Jitender Mann 'Gogi' and his two assailants, who were killed in a counter fire by Delhi Police.

Delhi's most wanted gangster Jitender Gogi was a history-sheeter. He was involved in several criminal cases in the national capital, including extortion, attempts to murder, murder, land grabbing, possession of illegal arms, etc.

He was jailed at Tihar since last year. Gogi's gang had a rivalry with a gang called the "Tillu gang" that was also involved in extortion. Gunmen from a rival gang dressed up as lawyers and barged into the courtroom and shot gangster Gogi.

After months of thorough investigation, Delhi Police on 12th January 2022 nabbed the 'main conspirator' of the Rohini Court shootout. Delhi Police successfully nabbed the accused Rakesh Tajpuriya, who was allegedly the conspirator behind the killing of his rival Jitender alias 'Gogi'in September last year. The case had shaken the Delhi Police, as the gangster Jitendra Gogi who was in Police custody was shot by two assailants in broad daylight in a Delhi Court.

Rakesh Tajpuriya was nabbed near the crossing at Chemical factory road, Narela Industrial area, after a brief exchange of fire. Tajpuriya carried a reward of ₹50,000 for his arrest.

One semi-automatic pistol with three live cartridges and three empty shells were recovered from the spot, police said.

The Special Cell received a piece of information that Rakesh was frequenting Alipur, Narela and other areas of Delhi and the NCR region and he was planning to kill a rival gangster of the Jitender Gogi gang. A team was deployed to develop the information.

Painstaking efforts of more than four months resulted in identifying hideouts of the gangster Rakesh Tajpuriya.

On 11th January 2022, police officer Shiv Kumar received specific information about Rakesh on a Honda Leo bike near Xing Chemical Factory Road, Narela Industrial Area, Delhi between 9:30 pm to 10:30 pm to meet his associate, a raiding party was formed and the trap was laid near the crossing.

Rakesh Tajpuriya is involved in more than 12 heinous criminal cases including murder, attempt to murder, robbery, extortion, hurt, assault on police, criminal intimidation, arms act in Delhi and Haryana during the last 10 years.

Arrested Rakesh Tajpuriya has disclosed that he with the help of his associates had escorted the shooters of the Tillu gang to court and provided them with the logistics support to execute the killing of Jitender aka Gogi as per the plan orchestrated by Sunil Tillu from jail.

In this 10-year long gang war between Sunil Maan aka Tillu and Jitender aka Gogi, almost 25 people lost their lives in Delhi and Haryana.