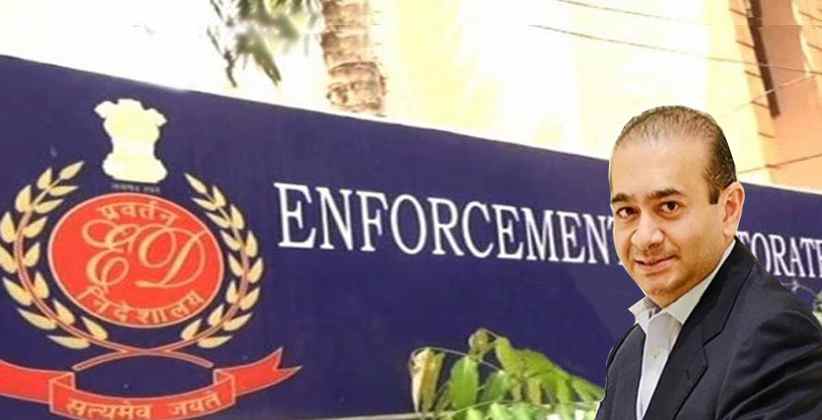 On Wednesday 8 July 2020, the Enforcement Directorate said that it confiscated assets worth Rs 329.66 croress belonging to economic offender Nirav Modi under the Fugitive Economic Offenders (FEO) Act, 2018. The action came a month after the Special Court had, on 8 June 2020, authorized ED to confiscate the assets

The multimillionaire diamond merchant, Nirav Modi, owns properties in Mumbai, Delhi, Jaipur, Alibaug, and Surat, including luxurious houses, flats, apartments, offices, and several plots of land worth Rs 1,400 croress approx., which will now be confiscated by the Government of India.

“The confiscated properties are in the form of four flats at the iconic building Samudra Mahal in Worli, Mumbai, a seaside farmhouse and land in Alibaug, a windmill in Jaisalmer, a flat in London and residential flats in UAE, shares and bank deposits,” the agency said in a statement.

He owns six apartments in Samudra Mahal in Mumbai, the cost of it being around Rs 100 crores each. Apart from this, he possesses jewelry and cash of croress of rupees. All these assets will be seized by the central probe agency.

The confiscation of remaining properties that were attached by ED under the Fugitive Economic Offenders Act has also been taken up. The Enforcement Directorate, in this case, has attached properties worth Rs 2,348 crores approx. belonging to Nirav Modi under the Prevention of Money Laundering Act, 2002 (PMLA).

Nirav Modi and his accomplice and businessman Mehul Chowksi are the prime accused in the PNB scam case, wherein, they defrauded the bank of more than $ 2 billion (Rs 14,000 crores approx.). The offenders have been absconding since then to elude criminal prosecution in Indian courts of law.

On 10 July 2018, Enforcement Directorate (ED) had filed an application seeking a declaration of Nirav Modi as a Fugitive Economic Offender, and confiscation of his properties worth Rs 1,396 crores approx. (as valued at that time) and other entities owned by him.

On 5 December 2019, the Special Court declared Nirav Modi a Fugitive Economic Offender under the FEO Act, 2018. In addition to this, in its order dated 8 June, the special court directed ED to attach the properties (except those mortgaged or hypothecated or secured to Punjab National Bank (PNB) led consortium) and companies of Nirav Modi, and ordered that after attachment, the properties shall be remain confiscated with the Central government.

The consortium of banks, led by Punjab National Bank, can approach the PMLA Special Court under Section 8(8) to claim the mortgaged or hypothecated or secured properties that were attached by ED, the Court further said.

After a thorough examination of the properties attached, it was found that properties worth Rs 1,000 crores were prima facie covered under mortgage et cetera.

Presently, Modi is lodged in a UK jail where he landed up after being arrested in London in March 2019 and is fighting against his extradition to India. Mehul Chowksi has taken citizenship of the Caribbean Island nation of Antigua & Barbuda.

Under FEOA, a fugitive economic offender is a person against whom an arrest warrant has been issued for his or her involvement in economic offenses involving at least Rs 100 crores or more and has fled away from India to avoid legal prosecution. The Act empowers the Court to order confiscation of the offender’s attached properties in India as well as abroad. Nirav Modi is the second businessman to be declared an FEO under the Act, after Vijay Mallya.