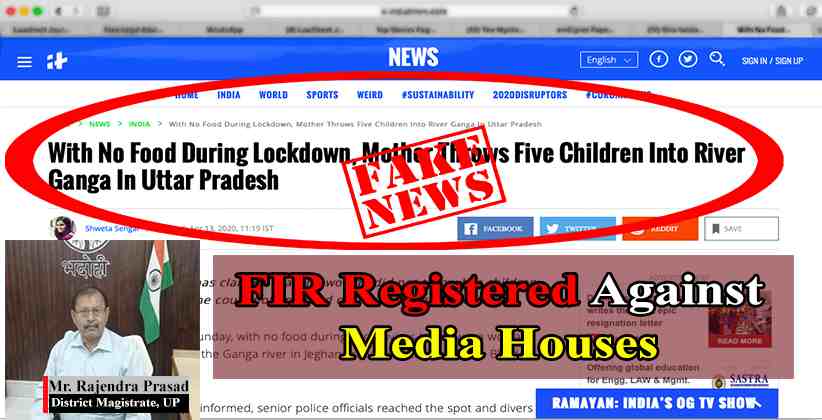 Upon LawStreet Journal’s initiative, the Bhadohi Police (U.P.) has registered an FIR against IANS India Pvt. Ltd., Business Insider India, Saleem Akhtar Siddiqui - journalist from Meerut and Hansraj Meena, from Rajasthan, for circulating fake news that a woman drowned her 5 children because of unavailability of food during lockdown.

But the truth is that on April 12, 2020 in a village of Uttar Pradesh a woman jumped with her children in river Ganga, but as the children started to drown, she came out of the river. In the morning when villagers saw her sitting, she narrated that she committed such an act because of her husband. She said that her husband has drinking and gambling problems due to which she had a quarrel with him and because of the quarrel she attempted suicide and drowned her 5 kids as well.

When the police officials asked the husband, he said that she is mentally unsound and that he does not know why such a step was taken by her, he went to Jharkhand with some relatives the night when the incident took place however the wife accused the husband of physical abuse on a routine basis due to which she decided to do so.

As reported by LawStreet Journal, all mainstream media channels (except Business Insider, Indiatimes, Greater Kashmiri and The Siasat Daily) had posted articles on the same issue responsibly whereas the above four mentioned media channels, displayed highly irresponsible, reckless and unacceptable journalism at this crucial time of pandemic.

Media channel Indiatimes postedan articlewith headline “With No Food During Lockdown Mother Throws 5 Children into River Ganga In Uttar Pradesh” and the post got around 40K shares and further got a whopping 13,000+ likes on its Instagram handle.

Further, as reported by Lawstreet Journal, the Indiatimes did not bring about any changes till 11: 19 AM (April 13, 2020) i.e. even after about 20 hours of circulation of this fake news before finally changing their heading at 11:40 AM. However, by that time the fake news had already been widely circulated, quoted and tweeted by thousands. Similarly, Greater Kashmir, The Siasat Daily and Business Insider also published the same.

LawStreet Journal Editor had then spoken with Mr. Rajendra Prasad, District Magistrate, UP wherebyMr. Prasad stated that there was no such incident of lack of food and that the lady herself told to the police and the villagers that she herself drowned her five children in Ganga due to an argument with her husband and not because of lack of ration and food grains facility.

The officers and their units on duty are continuously working to supply ration to each and every house amid the lockdown and fake news such as this is a mockery towards their efforts.

Pursuant to the conversation with LawStreet Journal Editor Ms. Kshipra Srivastava, Mr. Prasad stated that FIR shall be initiated against such entities for spreading fake news as this weakens the confidence among people towards the administration and government.

Fake news by these four media houses raised a roar of allegation towards Government and its functioning and several renowned personalities shared and tweeted about the same creating havoc on social media.

FIR has been filed under the following sections:

Section 505(1)(b) of Indian Penal Code, 1860: The punishment for making, publishing or circulating any statement, rumours or report which may cause fear or alarm to the public, or to any section of the public.

Punishment: Imprisonment which may extend to 3 years or fine or both.

Section 51 of the Disaster Management Act, 2005: Whosoever without any cause obstruct any officer or employee of central government or the state government or a person authorized by national authority or state authority or the district authority in the discharge of his functions.

Section 54 of the Disaster Management Act, 2005: Whoever makes or circulates a false alarm or warning as to disaster or its severity or magnitude, leading to panic.

Punishment: Imprisonment which may extend to 1 month or fine or both.

During this crucial time of pandemic, the media houses must adhere to prudence and must practice responsible journalism.

[Breaking]: Business Insider, Indiatimes, Greater Kashmiri & The Siasat Daily Circulate Fake News About Woman Drowning Her 5 Children Due To No Food During Lockdown