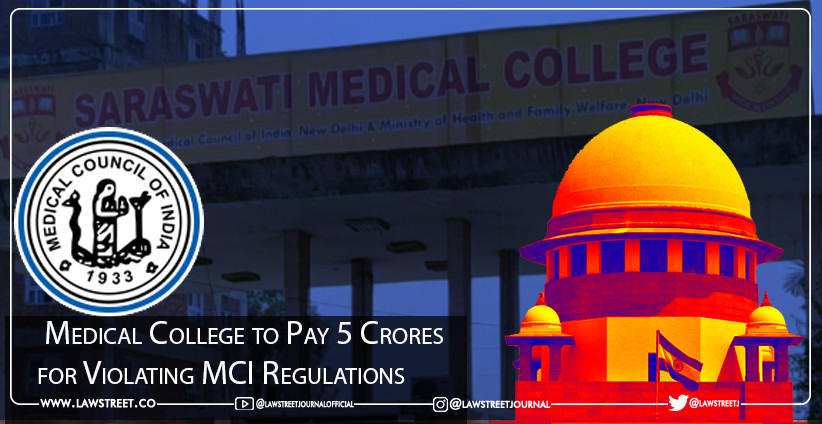 Crime, Police And Law Feb 26, 2021 Namya Bose ( Editor: Ekta Joshi ) 8 Shares
8 Shares
An amount of Rupees Five Crores has been directed to be deposited by ‘Saraswati Medical College’ to the Supreme Court Registry for the violation of the Medical Council Regulations by intentionally granting admission to students who were not allotted admission by the Director General Medical Education.

The Court ruled against Saraswati Medical College, saying that such violation and immoral behaviour on the College’s part is unacceptable. Such a conduct cannot be overlooked and action must be taken. The College was held guilty was providing admission to a total of 132 students on their own and further allowing them to continue, despite directions of their discharge given by the Medical Council of India.

The National Medical Commission was directed to constitute a trust which included Accountant General of the State of UP and a representative of the State as Members of the Trust to take care of the management of the amount of Rupees Five Crores. Within 2 weeks from the date of the court judgement, the National medical Commission has to file an ‘Action Taken Report’. The bench of Justice Nageswara Rao and Justice Ravindra Bhat observed the writ petition filed by Saraswati Educational Charitable Trust in 2017 that challenged the notice that the MCI issued to Saraswati Medical College that directed the college to discharge the 132 students out of the 150 admitted to the MBBS course(2017-18). The court also took notice for the plea petition filed in 2019 by 71 students of the first year MBBS course that were seeking the continuation of their studies in Saraswati Medical College also asking to direct the MCI to declare ther first year results. The Court responded saying that the College should not have made the mistake of admitting these students on their own terms without the permission of the Director General Medical Education and further, the delay of declaration of the first year results of the MBBS course was not to be blamed on the Director. The College submitted to the Court that there were no other alternatives available and that there was no choice but to admit students from the list on the notice given by the Director General, which the Court immediately rejected.

The College was considered to have acted completely contrary to the laid regulations. The Court left the responsibility of deciding the community punishment of the 132 students on the National Medical Commission.  The Court clarified that the University must conduct the second year MBBS examinations and declare the results at the earliest and this is being allowed under “peculiar facts and circumstances” only so that the student do not lose three years in academics.  The Court stated, 'this judgement and decision,therefore, shall not be treated as a precedent'.