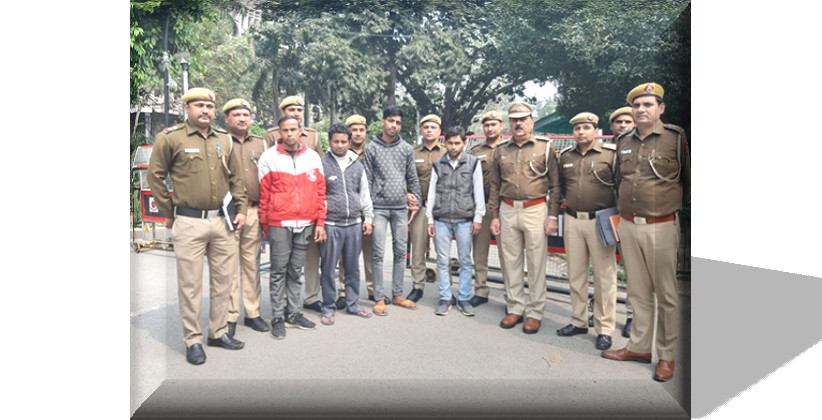 Crime, Police And Law Mar 05, 2019 Syed Wajid 1 Shares
1 Share
A window on a different world altogether once lodged in jail. It's said that best of friendship and worst of enmity all are offered here behind these high walls. A case quite similar, as friendship blossomed at Delhi's Tihar Jail that hatched a plot to murder one out of hostility that too nursed behind bars.

A murder case of a 25-year-old female under PS Sarita Vihar more of a mystery was worked out after the police put in their tireless and strenuous efforts. The four accused involved in murder of a lady were identified as Dinesh 25 years, Saurabh Bhardwaj 19 years, Chandrekesh alias Bunty 30 years and Rahimuddin alias Rahim 25 years. The quartet killed the lady with intent to take revenge, they strangulated her and dumped the dead body stuffed in a gunny bag near Sarita Vihar railway track.

"We received a call about a gunny bag found in a suspicious manner near Sarita Vihar U-turn near railway track. Our men swung into action and rushed to the spot and found a body of young female aged about 25 years tied in a gunny bag. The inspection of the body was done and apparently, some injury marks were found on her neck. One mobile phone and a hand written note were also recovered from the pocket of the deceased. We took no time to gauge that the girl was murdered somewhere else and dumped here," Chinmoy Biswal DCP south east district averred. A team comprising inspector Suman Kumar, SI Benkatesh, SI Satish and ASI Layak Ali led by SHO inspector Ajab Singh under the close supervision of  Dhal Singh ACP sub-division Sarita Vihar. The enormous challenge for the police was to establish the identity of the deceased. Efforts were made to get the murdered female identified and the Herculean efforts of the team paid off. The deceased was identified as Maya (name changed) of Dakshin Puri. She had been missing from the area of PS Ambedkar Nagar since February 26 this year. The police team visited the house of the deceased and examined her family members and relatives. The team collected hand writing samples from the house of the deceased to match with the one recovered from the pockets of her denims. The hand writing agreed to the one in the note and the note alleged three persons, CDRs also confirmed the talks had between the deceased and the alleged persons. The police apprehended them and interrogated the movement of the alleged persons did not contradict with the murder of the deceased. All the further three persons denied knowing the deceased. Finding the dead end near, the police team extended its sphere of investigation and started minutely examining every aspect of the case. The team examined many persons and several raids were conducted in the area of Sangam Vihar, Dakshinpuri, Devali, Tigri and Ambedkar Nagar. Finally, the sustained efforts of the team paid off. On March 3, 2019, the police nabbed one Dinesh of Sangam Vihar. He denied any involvement in the case but once he was confronted with his movements, he broke down and confessed to the crime. At his instance, his associates Saurabh Bhardwaj, Chanderkesh and Rahimuudin were also arrested from Sangam Vihar. When Dinesh was questioned, he revealed that he used to commit snatching and theft to meet his needs and was previously arrested in 9 cases. When Dinesh was at Tihar Jail, he got friendly with an inmate Dhirender. When the accused persons were in jail, Dhirender harboured a grudge against another under-trial Bunty. After releasing from the jail, for past 2 months, they both Dinesh and Dhirender had been staying together at Sangam Vihar. After releasing, Dhirender alongwith Dinesh hatched a conspiracy to teach Bunty a lesson and they also wanted to grab the property of Bunty, which he allegedly acquired through illegal sources. Dinesh roped in his friend Saurabh Bhardwaj in their plan and purchased a new mobile phone and a SIM. On February 25 2019, Dinesh called a girl 'Maya' who was already known to Dinesh and on the pretext of providing her with a job, called her to his flat. When Maya reached the flat, she was overpowered by Dinesh, Dhirender and Saurabh. Accused persons confined the victim and assaulted her. Thereafter, on the pretext of releasing her, the accused persons forcefully compelled the victim to write a letter and falsely name one Aarush of Burari and 2 other boys of Sangam Vihar, to mislead the police. Interestingly, Aarush was brother of Bunty, with whom Dhirender developed enmity during his stay at Tihar jail. In order to take revenge on him and also to grab property of Bunty, the accused Dhirender made this plan. The accused persons also made calls from the mobile of the victim to the numbers of all the 3 alleged persons, to falsely frame them in the case. Later on, the accused persons strangulated the victim to death. Her body was wrapped in a gunny bag. Dinesh also deleted his new number from the mobile of the deceased and threw his new mobile phone in a drain. Thereafter, the accused persons hired a Honda City for ₹ 7800 from Revv Cars. Further, they also hired 2 more persons namely Rahimuudin and Chanderkesh for ₹ 4000 for dumping the dead body. On the night of February 26 2019, the accused persons parked the car in the basement of the flat and loaded the body. Before dumping the dead body, the accused persons bought and consumed alcohol from a wine shop at Saket Select City Mall. In the late night, the accused persons dumped the body of the deceased on an isolated spot near the railway line. At the instance of the accused persons, the mobile phone of Dinesh which was thrown by him in the drain was recovered. Further, efforts are being made to arrest Dhirender, who is on the run and raids are being carried out on his hideouts. The police recovered new mobile phone of Dinesh used in making calls to the deceased, plastic tapes used in tying the deceased, the pen and the car used in dumping the deadbody.

Crime, Police And Law May 27, 2019 Lawstreet News Network 1 Shares
1 Share
A 30-year-old man allegedly committed suicide by jumping off the DND Flyover into the Yamuna at night on May 25, 2019.The victim identified as Virender Singh has allegedly committed suicide over a family dispute. His body was fished out on May 26, 2019.Additional DCP (Southeast) Kumar Gyanesh said the inquest proceedings under Section 174 of the Code of Criminal Procedure, 1973, were initiated.The incident took place around 11pm on Saturday after a few passersby reported that a man had...
Read full post