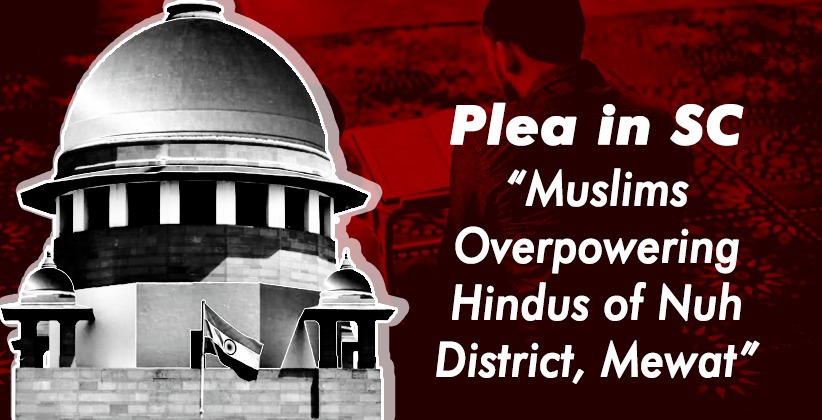 Crime, Police And Law Oct 31, 2020 M V Manasa ( Editor: Ekta Joshi ) 4 Shares
4 Shares
A plea has been filed in the Supreme Court, praying for the protection against the Muslim community of Nuh district of Mewat, Haryana about overpowering Hindus of that area. Advocate Vishnu Shankar Jain has filed a petition saying that the local police have failed to exercise powers, as a result, the life and liberty of the Hindus are in a danger. People of Nuh district are being treated brutally which is leading them to live animalistic life, the plea also alleged that the anti-national elements are very present in that area.

The plea stated that “The state of Haryana failed to disclose the facts of various FIRs and complaints of various heinous crimes, lodged by Hindus against Muslims for their tortures and atrocities committed on them, leave apart taking any action on the side FIRs or complaints.” The plea further stated that “A number of Hindus are being forcibly converted to Islam and the number of Hindu women and minor girls have been abducted and raped. Hindu women are not safe at all. The Muslims at a large number have committed atrocities on members of the Scheduled caste.”

The plea also mentioned that a Special Investigation Team (SIT) has been formulated which be monitored by the Supreme Court, consist of the members of the CBI and NIA to look into the matters of forceful conversions, rapes of Hindu women, and illegal encroachment of properties in the Nuh district of Haryana. The plea also stated that the committee which visited the area for the evidence suggested that over 400 villages, 103 have become totally devoid of the Hindu populace. A report of the same has been provided to the Chief Minister of Haryana as well as the petitioner states. Alleging that the Muslims under the influence of the Tablighi Jamaat have eventually increased their strength which resulted in the population of Hindus at a decreasing rate. It was also mentioned that the populace has come down from 20% to 10-11% since the last census of 2011. Further, the question raised was whether the central government is under a constitutional obligation to deploy Armed Force/Parliamentary Force to protect the district Mewat Nuh from an internal disturbance in the exercise of the powers vested in it under Article 355 of the Constitution of India? Alleging that the sale deed executed by Hindus in favor of Muslims for the last 10 years were executed under coercion and undue influence, in which the petitioner has sought the nullification.

Judiciary Nov 27, 2020 Lawstreet News Network ( Editor: Ekta Joshi ) 8 Shares
8 Shares
The Madras Bar Association by way of writ petition in the Supreme Court has challenged the rules formulated in February 2020 known as the Tribunal, Appellate Tribunal and other Authorities (Qualifications, Experience and other Conditions of Service of Members) Rules, 2020 (The Tribunal Rules 2020).The petition stated that the Tribunal Rules 2020 should be struck down as it poses a threat to Articles 14 (right to equality of law) and 21 (right to life) for being arbitrary and unreasonable...
Read full post