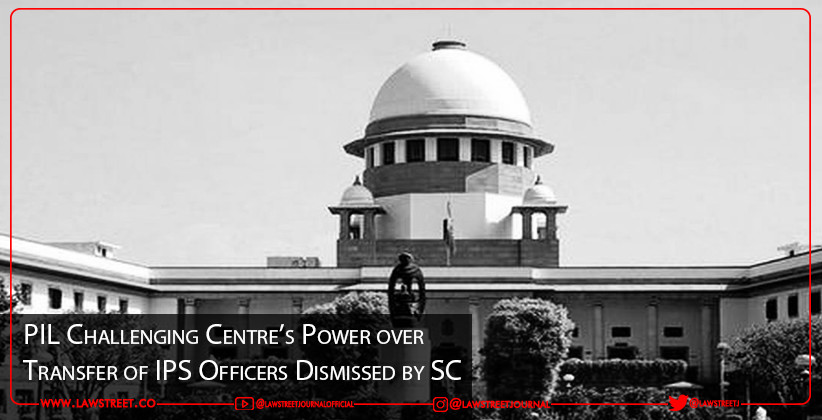 Crime, Police And Law Mar 02, 2021 Tanya Sehrawat ( Editor: Ekta Joshi ) 2 Shares
2 Shares
On Monday (March 1, 2021), a PIL was dismissed by the Supreme Court which challenged the constitutionality of Rule 6(1) of the Indian Police Services (Cadre) Rules, 1954. It grants the power to the Central Government to override the states in matters of deputation as well as transfer of IPS Cadre Officers. The PIL had been filed by Abu Sohel, a lawyer based in Bengal which was taken up by the SC bench headed by Justice Nageswara Rao.

It was urged by the petitioner Abu Sohel, "Such being the prevalent situation in the country, there have been several face offs between Centre and the State which ultimately threatened the federal structure of our constitution.”

He also went on to contend that the intent of the makers behind this rule can be understood, which is to create harmony between the Centre and the State on overlap of power. However, the opposite scenario has been prevailing which raises questions on the establishment of the said impugned rule.

In his contentions, Sohel pointed out, "That in 2001, the infamous and ugly spat took place between the Centre and the Government of Tamil Nadu when the Centre decided to call back three IPS from the state of Tamil Nadu.

The petition highlighted various other instances of conflicts. One of the recent ones was of the calling back of three IPS officers from the State of West Bengal "with utmost political vendetta against the interest of State and State machineries.”

Lastly, the petition alleged that there remains a contrariety between Rule 5(1) and Rule 6(1). Rule 5(1) empowers the Central Government for allocation of officers to various cadres in consultation with the State Government.