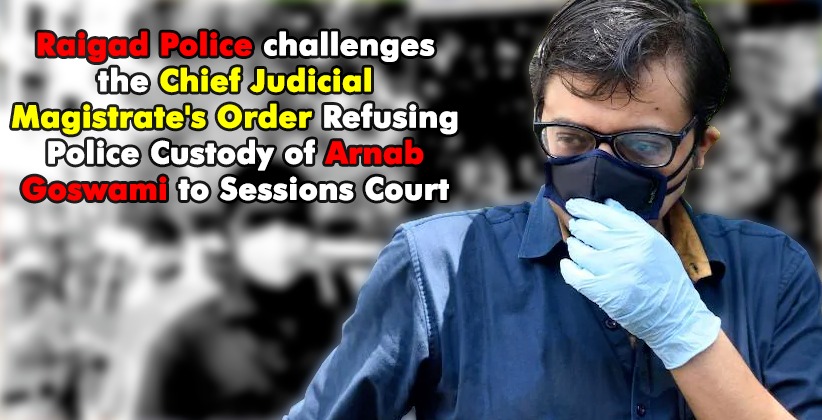 The Alibaug police in Raigad district on November 5, 2020 has filed a revision application before the Sessions Court which challenged the order passed by the lower court remanding Republic TV editor-in-chief Arnab Goswami and two others to judicial custody in an abetment of suicide case.

Chief Judicial Magistrate Sunaina, Pingle on November 5, 2020 even after perusal of the case diary and other relevant documents noted that the prosecution has failed to prima facie establish a link between the deceased and the accused persons.

The Chief Judicial Magistrate ordered late night about the remand of Arnab Goswami and two other accused person in judicial custody till November 18, 2020 in the case of suicide of interior designer Anvay Naik and his mother resident of Alibaug over alleged non- payment of dues by the company of the accused persons.

The Police in its application have said that Chief Judicial Magistrate court at Alibaug has erred in not considering the submissions and the ground which was submitted by the prosecution while seeking the custody of Arnab Goswami and two other arrested accused  Feroze Shaikh and Nitesh Sarda.

The police sought the Session Court to close the Chief Judicial Magistrate order and grant them custody of 3 accused the Sessions Court at Alibaug around 90 km away from Mumbai hear the application on November 7, 2020.

Chief Judicial Magistrate Pingle noted that the chain of the circumstances which is the main reason behind the deaths of Anvay Naik and his mother and its connection with the accused person are not been established by the prosecution.

Team of the Raigad police arrested Arnab Goswami from his residence at Lower Parel in Mumbai on November 4, 2020. Arnab Goswami and two other accused were later produced before the Chief Judicial Magistrate, Pingle in Alibaug and remanded in the judicial custody. Arnab Goswami is presently kept at a local school which has been designated as a covid-19 Centre for the Alibaug prison.

Judiciary Mar 11, 2021 Snehal Khemka ( Editor: Ekta Joshi ) Shares
0 Shares
The Bombay High Court, on Friday, March 05, 2021 granted interim protection to Republic TV  editor-in-chief Arnab Goswami, exempting him from personally appearing before the Alibaug magistrate in relation to interior designer Anvay Naik’s abetment to suicide case till April 16. Goswami was earlier asked to appear before the court on March 10.  The CJM had also refused to give exemption from appearance.Goswami had sought exemption till his petition to quash the FIR and chargesheet...
Read full post