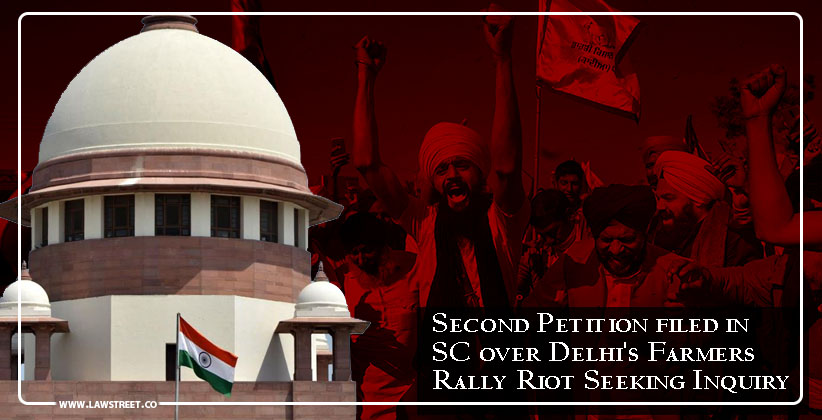 Crime, Police And Law Jan 28, 2021 Gautami Chakravarty ( Editor: Ekta Joshi ) 1 Shares
1 Share
Earlier on Tuesday, 26th January, 2021 the tractor parade meant to highlight the demands of the farmer unions dissolved into anarchy on the streets of the city as tens of thousands of protesters broke through barriers, fought with police, overturned vehicles &amp; hoisted a religious flag from the ramparts of the iconic Red Fort. According to a statement by police, 300 personnel have reported injuries in the violence.

In response to this, a plea has been filed in the Apex Court by Lawyer Vineet Jindal urging it to take suo moto cognizance of the violent incidents that took place during the farmers tractor tally on Republic Day. "It is humbly prayed that the Hon’ble Suprem Court may take Sou moto cognizance upon this letter petition in which we are praying to constitute an independent commission for enquiry of the above-mentioned incident; prompt action against all the culprits responsible for disruptions of law and order, damages caused to public property & being the cause of national embarrassment must be taken", the plea states.

It further notes, "I have filed a petition before the Chief Justice of India over the incident in our national capital which caused a great security concern."

The struggle between the police & the farmers continued throughout the day until late evening, a police statement reported, adding that most of the incidents were reported from Mukarba Chowk, Ghazipur, A-Point ITO, Seemapuri, Nangloi T-Point, Tikri Border and Red Fort.

A section of the crowd also managed to climb atop the rampart of the Red Fort where they hoisted another flag, the statement said. At Red Fort, they broke the gates & entered its wells. More FIRs are expected to be registered, the police said. It also worthy to note that as of Wednesday (January 27, 2020) morning, the number of registered FIRs in the matter has already risen to 20. Earlier,  a similar petition was also filed by a law student urging the top court to take suo moto cognizance of the insult to the national flag at the Red Fort by anti-farm law protesters.