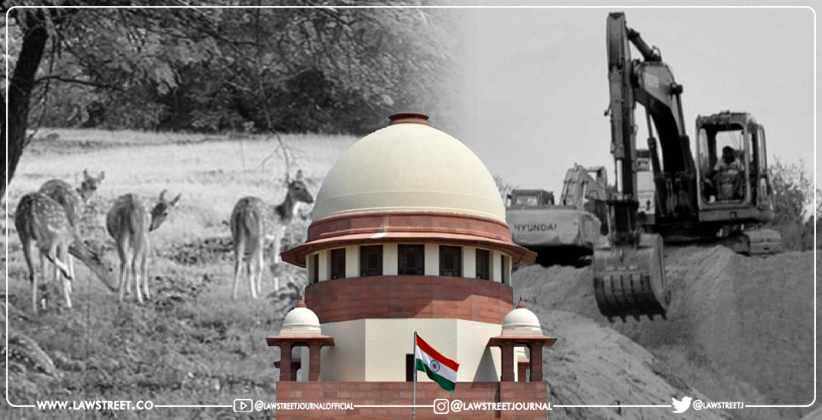 The Supreme Court directed the State of Odisha to implement the Comprehensive Wildlife Management Plan before permitting any mining activity in the eco-sensitive zone.

In this case, the National Green Tribunal had directed that mining activity shall not be permitted within and in the vicinity of Simplipal - Hadagarh - Kuldiha – Simplipal elephant corridor. The Tribunal ordered completion of the process under Section 36 of the Wildlife (Protection) Act, 1972 for declaration of conservation reserve in respect of the elephant corridor within a period of three months.

Aggrieved by the direction of stoppage of mining activity in the vicinity of the elephant corridor, the appellants approached the Apex Court contending that there is no justification for stopping mining activity in the area which does not fall within the eco-sensitive zone. On the other hand, the contesting respondent submitted that no mining activity can be permitted even in the vicinity of an eco-sensitive zone unless the Comprehensive Wildlife Management Plan has been implemented and Section 36A of the Act has been complied with.

"The dispute can be resolved by giving a direction to the State Government to implement the Comprehensive Wildlife Management Plan and complete the process of declaration of the traditional elephant corridor as conservation reserve as provided in Section 36A of the Act.", the bench comprising Justices L. Nageswara Rao and BR Gavai said.

The court noted that a Comprehensive Wildlife Management Plan for mitigation of impact which would be caused by operation of stone quarries in Khaira Tehsil near Kuldiha Wildlife Sanctuary, Balasore was prepared by the Divisional Forest Officer, Wildlife Division, Balasore and was approved by the Government of Odisha.

"It was noted in the said plan that 97 stone quarries are located immediately south to the Hadgarh Kuldiha Elephant Corridor which is a part of the traditional Similipal – Hadgarh - Kuldiha Elephant Corridor. It was also stated that the corridor between Hadgarh and Kuldiha is used round the year for movement of elephant, herbivores and cats. On-site and off-site environmental affects that can be generated by quarrying through blasting, excavation, crushing, screening, stockpiling and transporting of aggregate were also recognised in the plan. It was mentioned that the environmental effects of quarrying, primarily includes the disturbance of land and vegetation, dust, vibration, noise, traffic, visual effects, impact on cultural and historical values, the discharge of contaminants into the air, water and land. Methods to manage noise issues, dust and air quality issues, traffic issues, and water quality issues have also been suggested in the Comprehensive Wildlife Management Plan.", the court noted

"The State of Odisha is directed to implement the Comprehensive Wildlife Management Plan as suggested by the Standing Committee of NBWL before permitting any mining activity in the eco-sensitive zone. The State is also directed to complete the process of declaration of the traditional elephant corridor as conservation reserve as per Section 36A of the Act expeditiously. The mining operations of 97 quarries shall be permitted only thereafter."

Delhi Riots: Speaking Up For Oppressed Minorities Does Not Make Someone Communal, Says Umar Khalid’s Lawyer In Court In Delhi