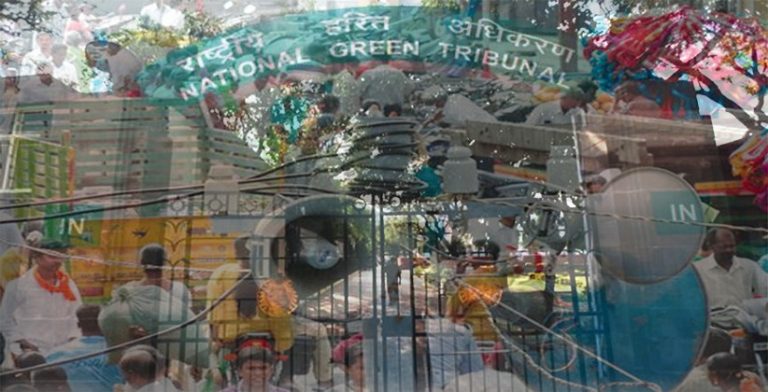 The National Green Tribunal (NGT) on February 12, 2019, in the case of Hardeep Singh & Ors. v. SDMC & Ors., has rapped the Delhi government for its failure to control noise pollution and slapped a fine of Rs 5 lakh on it for non-compliance of its order.

A Bench headed by NGT Chairperson Justice Adarsh Kumar Goel and comprising of Justice K. Ramakrishnan (Judicial Member) and Dr. Nagin Nanda (Expert Member) noted that more than four months have passed since its September 27, 2018, order and none of its directions have been complied.

On September 27, 2018, the green panel had directed the Chief Secretary, Delhi, the Commissioner of Police, Delhi and the Delhi Pollution Control Committee (DPCC) to take steps for enforcing the directions of the Hon’ble Supreme Court with regard to use of loud speakers, control of vehicular noise and creation of awareness.

“The Commissioner of Police was to nominate a DCP and the Chief Secretary was to nominate a SDM who were to meet once in every week to take stock of the situation. They were to set up an exclusive website and dedicated helpline, apart from other steps,” the NGT had said.

However, the Bench taking note of a report dated January 14, 2019, said that “neither helpline has been set up nor website has been set up and nor weekly meetings were held, as required…In view of above, it is patent that the authorities have failed to comply with the directions of this Tribunal.”

Thus, the Tribunal said that it “is constrained to take punitive measures to uphold the rule of law instead of remaining mute spectator when faced with failure of authorities in carrying out their obligation. Disobedience and disregard of law ought not to be taken lightly.”

The Tribunal directed the Aam Aadmi Party government to deposit the fine amount with the Central Pollution Control Board within a week and set the date for further hearing of the matter on March 14, 2019.

The tribunal was hearing a plea filed by Hardeep Singh and others alleging that there were use of DJ systems, music systems, public address systems etc. during weddings or other functions and noise was being created at odd hours adversely affecting the health of the citizens.