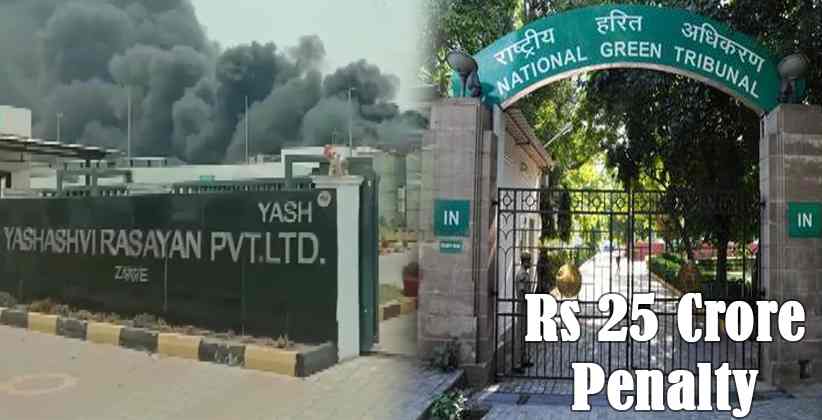 Environment Jun 10, 2020 Priyam Jain ( Editor: Ekta Joshi ) 4 Shares
4 Shares
The NGT on Monday, 8th June 2020 took cognizance of the massive blast which occurred in the chemical factory named Yashyashvi Rasayan Pvt. Ltd. on account of a fire in the tank of the factory licensed to manufacture chemicals including Methanol and Xylene mentioned in the Manufacture, Storage and Import of Hazardous Chemical Rules, 1989. Due to the accident, around 50 workers were reportedly injured and 8 were found to be dead, while bodies of some other workers were charred beyond recognition. In accordance with the same, the authorities had to shift about 4,800 inhabitants to a safer and secure location.

Commenting on the issue the Hon’ble Tribunal observed that the damage caused is the absolute and strict liability of the company since the damage severely affected human lives, human health, environment and property in violation of the environmental norm particularly the Manufacture, Storage and Import of Hazardous Chemical Rules, 1989 and the Chemical Accidents (Emergency, Planning, Preparedness, and Response) Rules, 1996 and the circular issued by the CPCB. The observation further clarified that the heirs or dependents of the deceased as well the people displaced on account of the accident had to be duly compensated by the company and that the company would also have to bear the cost of restoration of the environment for the damage caused. The above tribunal placed its reliance on Aryavart Foundation Vs M/s Vapi Green Enviro Ltd. & Ors and Vizag tragedy.   The National Green Tribunal has given several directives for interim compensation to be paid to those dead, injured, or displaced. The tribunal has set a claim of about Rs 15 lakhs each for the deceased duly taking into account multiplier of around 16 and loss of earning of about one lakh per year, taking the minimum wage, apart from conventional sums, about Rs 5 lakh per person for those severely injured, Rs 2.5 lakh each for those injured and hospitalized and finally about Rs 25,000 for those displaced on the account of this mishap.

The tribunal has further guided the company to make an interim deposit of about Rs 25 crores excluding the deposit/ payment already made in pursuance of the order of the GPCB or otherwise or under the Workmen’s Compensation Act, 1923 or any other statutory provisions or ex gratia in relation to the current accident.  It was further directed that an appropriate plan must be made by the company with the help of the District Magistrate in accordance with the District Legal Service Authority, Bharuch to be overseen by the Member Secretary, State Legal Service Authority in accord to facilitate the arrangement for the disbursements. The company has also been directed to deposit the agreed amount within 10 days from today Tuesday, 9th June 2020, and following which the disbursements can be within one month thereafter.  Further, in order to visit and inspect the site, the tribunal has ordered a 6-member committee that would provide its report on this accident within a week. The committee has been ordered to report the following specifications with coordinating agency being the CPCB: The bench responding to the above guidelines elaborated, “The amount may be disbursed by the District Magistrate by making disbursement plan. Disbursement plan may consider safeguards to ensure that amount reaches the beneficiaries and is not misappropriated by any intermediary.”  With assistance and consultation from the District Magistrate, 20, Bharuch, the committee has been directed to make final quantifications of compensation and thereby prepare a restoration plan with the necessary directions in mind. The tribunal has also asked the Chief Secretary, Gujarat to look into the matter and identify and take appropriate actions against the persons responsible for this fatality and the failure of law in permitting the company to operate and function without necessary statutory clearances within two months followed by a detailed report.  In relation to the restoration plan, it has been notified that the nodal agency will be the representative of MoEF&CC.  It has also been clarified that the company may bring into notice if the order of closure had been passed, before the recommencement of any operations in order to ensure that there is no violation of statutory provisions and safety measures. It was also mentioned that since this accident is similar to the one that took place in Vizag, it has become necessary for risk studies to be duly undertaken in the country by all industries dealing with hazardous chemicals and that their on-site and off-site plans are operational and mock drills are carried out for testing the same.