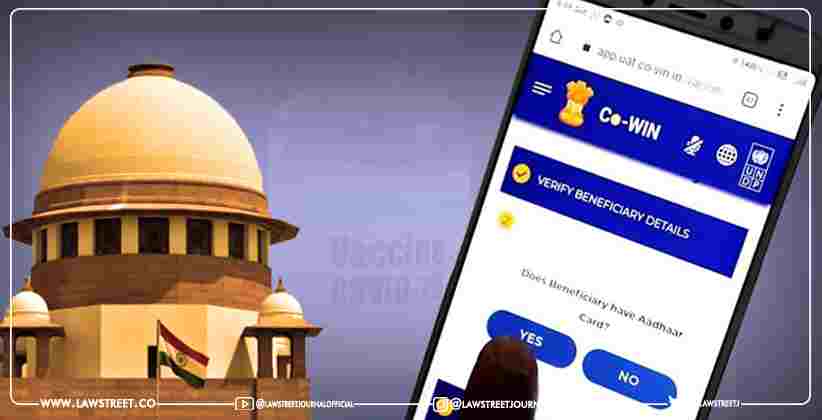 While defending its position on online registration for COVID vaccinations, the Centre told the Supreme Court that citizens who do not have access to the COWIN app can seek help from Common Service Centres established at the grassroot level by gram panchayats. According to the Centre, such people who do not have digital access can seek assistance from friends, family, NGOs, and the Common Service Centres.

The Central Government  in its affidavit stated that,"...citizens who do not have access to digital resources can seek assistance from family, friends, NGOs, and the above-mentioned Common Service Centres (CSC), among others, for online registration in Co-WIN."Registration through the Central Government's Co-Win app is required to obtain COVID vaccination slots.

The Common Service Centres provide access to the Internet to a wide range of people who may not be familiar with it or may not have direct access to it, the Central Government stated.

The Centre has also stated that these Common Service Centres are almost established by all gram Panchayats, which have a digital platform for people to use. In rural areas these Common Service Centre's and their infrastructure are widely and effectively usedfor a variety of purposes, and have been found to be an effective module for bringing development to the grass roots.

The Centre further stated that the majority of Indian population resides in rural areas. These areas are governed by local self-government at grass-roots levels such as Panchayats, and these grass-root level bodies have successfully represented India  in all State and Central schemes.

The centre made these submissions in an affidavit in accordance with the Supreme Court's order dated April 30, 2021 in the Suo Moto case regarding the distribution of essential supplies and services during the pandemic

The submission was made in response to the Supreme Court's order requesting a response from the Centre regarding any initiatives launched by the Central and State Governments to ensure immunisation of people who do not have access to digital resources.

"Whether the Central and State Governments have introduced any initiatives to ensure the immunisation of persons who do not have access to digital resources, as otherwise the mandatory requirement of registration over the Co-WIN digital portal for persons in the age group of 18-44 years will deprive a large class of citizens of vaccination," a bench comprised of Justices DY Chandrachud, L Nageswara Rao, and L Nageswara Rao asked the centre.

In response, the Centre noted that online registration will effectively avoid any such overcrowding because following the online registration,  each applicant are assigned the different time slots in advance, to ensure that crowding in the vaccination area is avoided at any given point in time.

The Central Government also informed the Supreme Court that, for the time being, only an online system of registration and booking is available for vaccination of people aged 18 to 44, a decision made with several administrative factors and for effective vaccine administration in mind.

According to the Centre, because vaccine doses are limited and production capacity is limited, allowing walk-in vaccination or registration is expected to result in overcrowding at vaccination centres, defeating the purpose of vaccination.

In  order to protect the fundamental rights to equality, life, and personal liberty for all persons eligible to receive the vaccine from May 1, 2021, the Central Government is directed by the Court to clarify the following issue.

"Whether the Central and State Governments have introduced any initiatives to ensure the immunisation of persons who do not have access to digital resources, as otherwise the mandatory requirement of registration over the Co-WIN digital portal for persons between the ages of 18 and 44 years will deprive a large class of citizens of vaccination," the Supreme Court had asked the Centre.

Also included in the Centre's affidavit:

As states have declared free vaccination, the price of vaccines will have no effect on the ultimate beneficiary, the Centre informed the Supreme Court