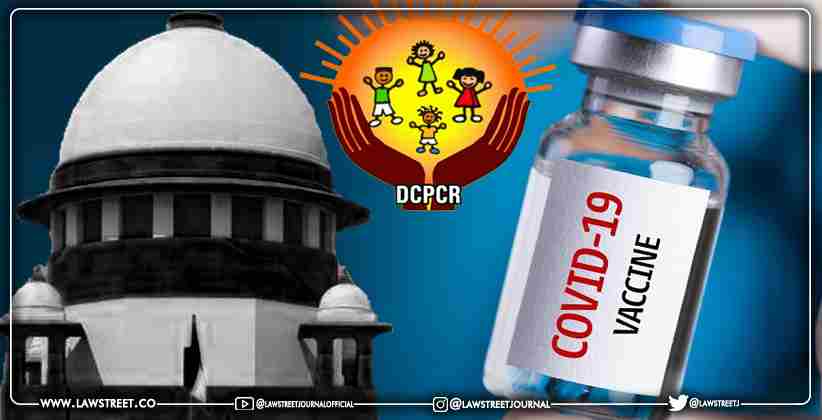 The Delhi Commission for Protection of Child Rights has approached the Supreme Court with a writ petition seeking directions for starting Covid-19 vaccination for pregnant and lactating mothers.

The petition submits that in India's phased roll-out of vaccination, which started from 16th January 2021 with vaccination of frontline workers and later extended to all adults from 1st May 2021, pregnant women and lactating mothers have been notably excluded. The petition challenges an Advisory issued by the Ministry of Health, and Family Welfare dated 14th January 2021, which is why pregnant women and lactating mothers are excluded from the ambit of vaccination.

The petitioner's case that new evidence has emerged supports vaccination of pregnant women and lactating mothers. The petition cites a position statement on covid vaccination for pregnant and breastfeeding women by the Federation of Obstetric and Gynaecological Societies of India, a medical professional organization representing obstetrics and gynaecology practitioners in India that supports vaccination for such women. The position statement is quoted in the petition as:

The petition further submits that the Centre for Disease Control and Prevention, the national public health agency in the U.S.A., has classified pregnant women as high-risk individuals and prioritised Covid-19 vaccination.

The World Health Organisation is also said to have approved vaccination for pregnant women. The petitioner also mentions in the petition that it had approached various experts in the domain within the country and that each of these experts has supported the initiation of Covid-19 vaccination to pregnant and lactating women.

The petition cites the various judgements of the Supreme Court like those in Vincent Panikurlangara v. Union of India &Ors., CESC Ltd. v. Subash Chandra Bose etc. to point out that the right to health under Article 21 of the Constitution is being violated by not providing for the vaccination of pregnant and lactating women.

The petitioner, in its petition, argues that it must monitor and evaluate the government schemes and policies concerning the rights of children and that if the vaccines are not administered to mothers, it can affect the health of the children also.

It was also pointed out that under its statutory obligation, the petitioner has already given its advice to the Union Government to include pregnant and lactating women under the ambit of vaccination, to keep a separate register to maintain their details and to do continuous monitoring for any side effects. The inaction of the government on these recommendations prompted the writ petition.

The petitioner's prayers are in line with the earlier recommendations given by the petitioner to the government.