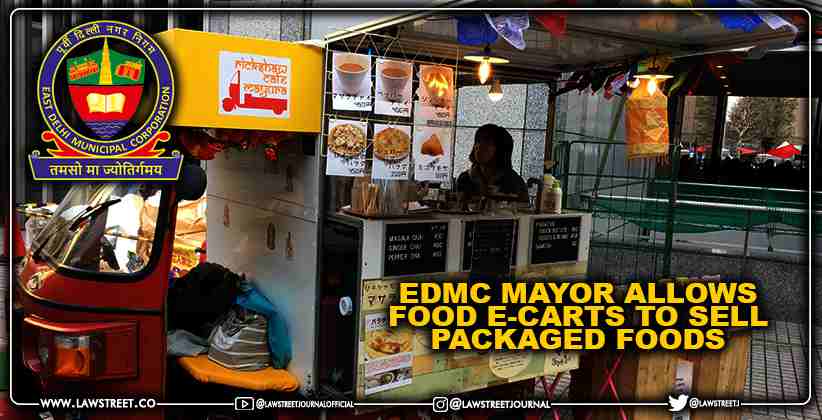 The East Delhi Municipal Corporation has decided to allow food e-carts to sell packaged foods and beverages in residential and mixed land areas.

The municipal officials stated that the mayor has approved the policy on health trade license the previous week to encourage entrepreneurship amongst people. Such a move will also help in generating more revenue for the people who are in dire need of income.

Nirmal Jain, Mayor of EDMC, informed that under the new policy licenses will be issued for battery-operated food e-carts for the sale of packaged foods and beverages.

Earlier this year, similar policies were formulated by North and South Municipalities.

“At the starting of the initiative, maximum of two e-carts will be allotted in each municipal ward, subject to obtaining a No Objection Certificate (NOC) from the Delhi traffic police. If the plan succeeds, the number of e-carts will be increased. These carts will be mobile and restricted for movement only in residential and mixed land roads, not in commercial areas and notified commercial roads,” said the Mayor (Nirmal Jain).

He added that the e-cart owners can use the prototypes of bus/train coaches for the operation of eatery establishments.

Further, he stated that EDMC is committed to working for the welfare for the citizens and initiating the policy would create employment opportunities for many people and help the corporation to become self-reliant.

A senior EDMC official, who asked not to be named, said there are a number of eateries already functioning at different locations on mix land-use streets and residential areas falling under the EDMC jurisdiction but the civic body does not get any revenue from such establishments. “This policy will streamline the problem of haphazard mushrooming of such food carts in every corner of the East Delhi. It will pave a way to regulate and legalise such food carts after paying a licence fee, which will be decided later,” the official said in his statement.