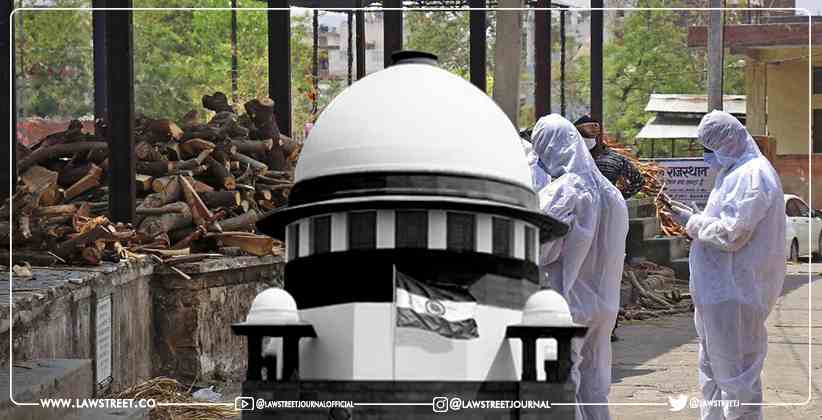 "Ex gratia assistance to families affected by COVID 19 deaths will continue to be provided for deaths that may occur in future phases of the COVID 19 pandemic as well as until further notification," the affidavit states.

The Centre has also informed the Supreme Court that the amount per deceased person will include those who were involved in relief operations or who were involved in preparation activities, subject to the cause of death being certified as COVID 19. The guidelines issued by the MOHFW and ICMR on September 3, 2021 will govern the resolution of certification grievances.

States will pay the funds from the State Disaster Response Fund ("SDRF"). The DDMA/District Administration would also disburse ex gratia assistance to the deceased persons' next of kin, according to the affidavit.

"Concerned families will file claims using a form issued by the State Authority, along with specified documents such as a death certificate certifying the cause of death as COVID. The DDMA will ensure that the process of claim, verification, sanction, and final disbursement of ex gratia is carried out in accordance with a robust yet simple and user-friendly procedure. All claims must be settled and disbursed through Aadhaar Linked Direct Benefit Transfer procedures within 30 days of receipt of required documents", the affidavit adds.

In the Guidelines for Ex Gratia Assistance to Next of Kin of the Deceased by COVID 19, the NDMA has also established a District Level Committee comprised of:

Which would provide the necessary redressal measures for the grievances regarding death certification. After verifying facts in accordance with these guidelines, the Committee would also issue an amended Official Document for COVID 19's death. Directions have also been issued to the Committee to record the reasons for any decision that does not favour the Claimant.

"More research is needed to lay the groundwork for these proposed insurance interventions. It is critical that these insurance mechanisms be thoroughly studied, analysed, and implemented with due diligence in collaboration with insurance companies, which is a time-consuming process ", the affidavit goes on to say.

On September 11, 2021, the Supreme Court, while reviewing the new guidelines issued by the Union Ministry of Health and Family Welfare to simplify the process of issuing death certificates in accordance with the directions in the June 30 judgement, asked the Centre to reconsider its decision not to include suicide as a COVID 19 death even if COVID 19 is an accompanying condition.

The division bench of Justices MR Shah and AS Bopanna noted that some creases needed to be ironed out and requested that the Centre consider/reconsider the following issues:

● Documents to be submitted by family members before the Committee

●Documents to be provided by the concerned Hospitals

The Supreme Court had also requested that the Union provide information to the Court regarding compliance with the guidelines that were to be issued by the National Disaster Management Authority for the determination of compensation.

Further, Oon September 11, 2021, Solicitor General Tushar Mehta stated that the guidelines for determining compensation would be in place before the next date of hearing, which is September 23, 2021.