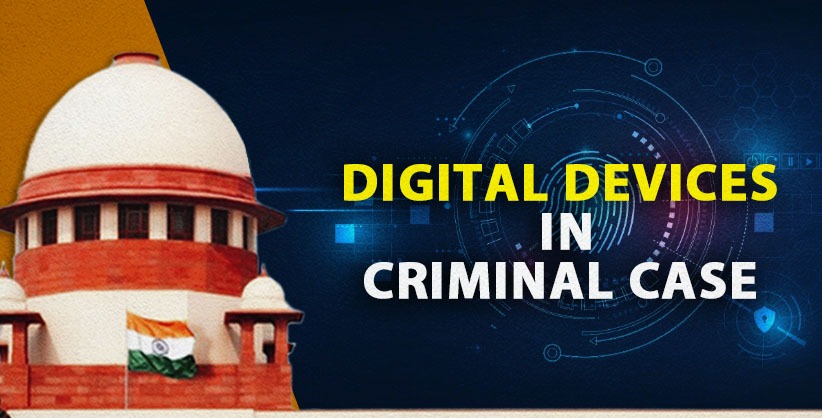 NEW DELHI: The Union government has told the Supreme Court that it is important to consult all stake holders, including the States, for laying down guidelines for preserving contents of digital devices in case of seizures by the investigating agencies during investigation of a criminal case.

It also maintained the individual rights claimed in the present case is to be necessarily counter balanced with the larger societal rights.

Responding to the top court's notice issued on a plea by a group of academicians, the Ministry of Home Affairs said it is put on record that there are existing guidelines being followed by the law enforcement agencies and if a common guidelines are to be adopted, then it may only be adopted after wider consultation among all the stakeholders.

"It would be important and appropriate to take suggestions/objections from all quarters on an issue concerning enforcement of law and investigation of crimes. It is submitted that specifically, considering the federal structure and the entries in the Seventh Schedule, it would be appropriate to take States in the said consultative process," a written response said.

As on August 5, the top court noted the need for guidelines for the agencies, the MHA said good international practises could be adopted or adjusted to the Indian context, keeping in view the nature of crime, modus operandi of criminals and the procedural law within the constitutional boundaries.

The government also maintained vast majority of the apprehension and concern can be addressed by adherence to the CBI Manual, 2020.

"The manual has various provisions dealing with the present subject matter and would substantially allay the apprehensions of the petitioner while balancing the competing legitimate state interest within the confines of Indian constitutional and statutory framework," it said.

The government also said most of agencies have the procedural SOPs on the subject matter and the CBI Manual, in a detailed manner, deals with the subject of digital evidence and designs a procedure along with significant safeguard which is in tune with the statutory and constitution provisions in the country.

"As far as the issue concerning the safeguarding of academic research of persons under investigation whose electronic devices have been seized is concerned, it is suggested that in appropriate cases and where the competing interest of investigating agency permit, the accused may be allowed to pursue their statutory rights before competent courts under section 451 of the CrPC in order to seek cloned images of the hard drive of the devices which have been seized by the investigating agency, subject to the orders from the competent court," the reply said.

It also contended that considering the exigencies of the investigation and the varying degrees of sensitivity of the data and the stage of investigation, it would be inappropriate to pass any blanket order regarding return of such documents to persons under investigation.

"The statutory procedure under section 451 of the CrPC, stated guidelines, harmoniously balances the constitutional rights of individuals along with the legitimate State interest involved in such cases," it said.

The government also said before embarking upon the academic exercise of comparative study of best practices on the issue of seizure of electronic evidence across the world, it may be noted that the Indian constitutional position with regard to search and seizure is naturally different from the constitutional position in other jurisdictions.

"While the right to privacy exists in all jurisdictions across the world, the regulation of same through statutory law is permissible and there can be no blanket exclusions," it said.

"It is the constitutional obligation of the government and its law enforcement agencies to ensure law and order. It is intrinsic in any nation state to ensure rule of law and investigate and prosecute for crimes. It is a legitimate state interest to implement an honest, uninfluenced and strong investigative and prosecutorial process. It is a cardinal rule of the criminal justice system that the State prosecutes and punishes for and on the behalf of the people of the State and specifically the victims of the crime. This representative form of litigation goes to the root of the social contract between the State and its residents. Therefore, the individual rights claimed in the present case is to be necessarily counter balanced with the larger societal rights as well," it said.

As the rights under Article 21 of the Constitution are subject to 'procedure established by law, it is submitted that the search and seizure of documents or electronic devices are clearly protected as they fall under the "procedure established by law", and are reasonable and are duly proportionate and further a legitimate state interest. The said processes are well within the judicially defined limits in the case of K S Puttaswamy vs Union of India, (2017) (right to privacy), it added.

As the investigating agencies had seized devices in several cases in the past, the academic community which does store their research and writings in the electronic and digital medium, faced the threat of loss or premature exposure of academic or literary work, their petition claimed.