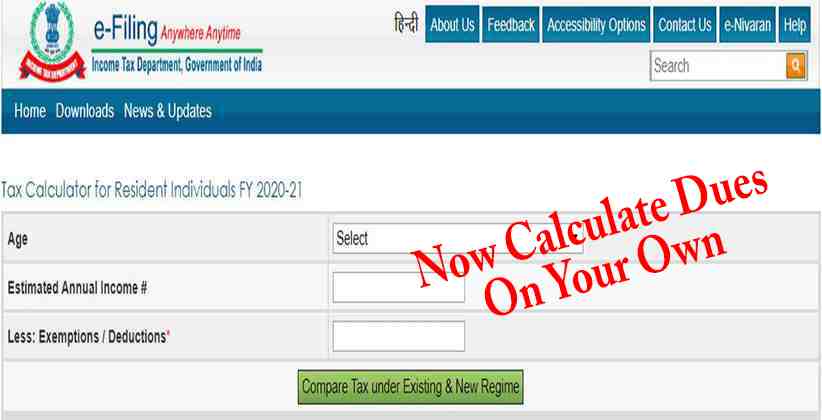 The Income Tax Department website has introduced a new income tax calculator as reported on 11th February, 2020. This new initiative claims that income tax e-filing on our own is a much easier task. In an interactive session with the Finance Ministry Niramala Sitharaman, Revenue Secretary Ajay Bhushan Pandey, the introduction of the new income tax calculator was put forth. Bhushan said that the design of the calculator has been made in a way that the tax claims can be filed without anyone's assistance.

"We don't want people to go to Chartered Accountants or @IncomeTaxIndia officers or anyone, taxpayers can just visit the website and understand which tax regime is better for them," said Ajay Bhushan Pandey, Revenue Secretary, Government of India. The calculator has been made available on the website since 7th February, 2020.

The income taxpayers who file their income tax returns will not have to follow accounting professionals henceforth. The calculator will state the income tax liability of the earning individual. Even an advance payment of the tax will be known so the assessment of earnings and savings can be done beforehand by the salaried person.

The step to step guide to use the new income tax calculator as introduced is:

2] Go to the important links on below left and click at tax calculator link;

4] Your income tax liability will be displayed on the computer monitor.

Judiciary Jul 29, 2021 Nargis Bano ( Editor: Ekta Joshi ) Shares
0 Shares
On July 16,2021, a Delhi High Court bench comprised of Justices Manmohan and Navin Chawla, while hearing a suit determining the authenticity of an email of adjournment and extension issued by the Income Tax Department, directed the Central Bureau of Investigation (CBI) to investigate whether the email was issued to the petitioner or not, and if so, by whom. The CBI was given four weeks to file its investigation report with the Court.The court also held that it is constitutionally obligated to...
Read full post