India and Pfizer in a deadlock, efforts to resolve the stalemate over an indemnity clause for vaccine side effects underway 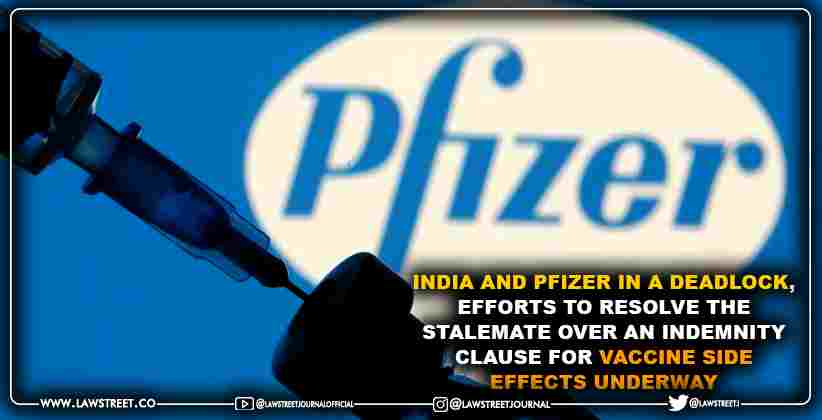 Pfizer and the government of India are seeking to resolve the impasse over the demand by the US drugmaker for legal protection from any claims linked to the use of its COVID-19 vaccine in Indian markets.

India is still in talks with Pfizer over the indemnity clause that provides immunity against compensation to the drugmaker for any severe side effects, which is a condition Pfizer has obtained in all the other countries where its shots have been used and administered, including Britain and the United States of America.

The Indian government is in a fix and it is crucial for the government to resolve the stalemate and reach an agreement as the country struggles to secure the required dosage of vaccine with the tally of more than 2,00,000 Covid cases looming over the heads of the authority, propping routinely.

In the light of the incessant rising of cases in the country with a population of over 1.3 billion people, it can be inferred that the number of vaccinated people roughly touching 19 crores will inevitably raise concern over the humongous population that still remains unvaccinated in the backdrop of limited vaccine production.

Indian foreign minister plans to visit the United States in the coming weeks, a source cited and he could also offer Pfizer some protection from lawsuits in exchange for the distribution of its vaccine in India. However, the same is yet to be confirmed by the Indian Foreign Ministry.

Another issue being discussed between the drug manufacturing company and the government was the government’s insistence on a local trial for vaccine approval, which Pfizer cannot finalize until the terms of a supply agreement, including the clause of indemnity is agreed upon, the source cited.

Pfizer withdrew its application for emergency use authorization for the vaccine developed with Germany‘s BioNTech in February after India Insisted on similar trials.

Three other vaccines shots on sale in India, developed by AstraZeneca, Russia’s Sputnik and Bharat Biotech with the state-run Council of Medical Research, have all completed small-scale safety trials.

Last month, India pledged the fast-track approval for overseas vaccine makers including Pfizer, Moderna and Johnson and Johnson. However, none of the manufacturers has sought permission from Indian drug regulators to sell their vaccines in India.

Earlier this week, Pfizer and Moderna had refused to send the vaccine directly to the state governments after Sputnik V, Pfizer, Moderna and Johnson and Johnson were approached for direct purchase of COVID vaccines by the state of Punjab, as per the directions of the Chief Minister Amarinder Singh, seeking to explore the possibility of floating global tenders for procuring the vaccines. Pfizer, clearing its stance, stated that their supply agreements at the time are with national governments and supra-organizations.

After this development, it becomes pertinent for the Government of India to procure the vaccine and bridge the dispute over vaccine indemnity.

Pfizer’s chief executive, Albert Bourla, on May 4th, 2021, said that he was hopeful that the government would change its policy of trials and make way for the delivery of Pfizer’s shot in India.