COVID-19: Plea in SC seeks directions to the Central Government and the Government of Uttarakhand to withdraw advertisements inviting people to the Kumbh Mela 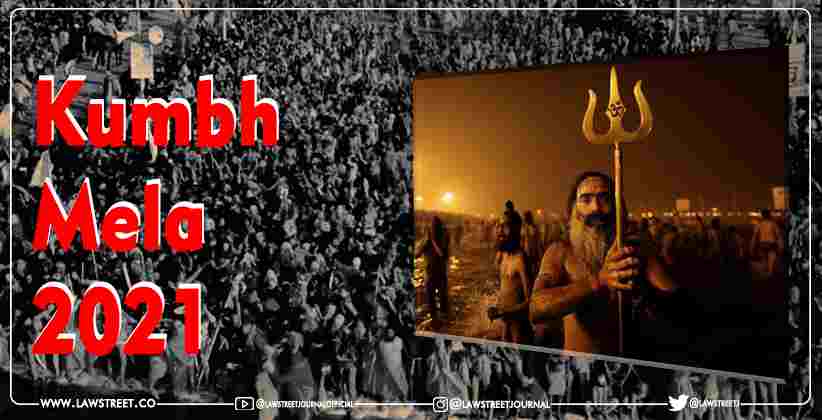 Executive Apr 21, 2021 Nargis Bano ( Editor: Ekta Joshi ) 4 Shares
4 Shares
A plea has been filed in  the Supreme Court by a Noida- based Advocate. In his plea, the petitioner has urged the Supreme Court to issue the strict directions to the Central Government and the Government of Uttarakhand to withdraw all the advertisements inviting people to Haridwar for Kumbh Mela, keeping in view the facts and figures of  the COVID-19 pandemic.

The petitioner, Sanjay Kumar Pathak  in his petition filed before the apex court on Friday (April 16, 2021),/has urged the Supreme Court to issue directions to the Union Government, Uttarakhand Government, and the National Disaster Management Authority ( NDMA) to clear the mass gathering from the  Haridwar City as soon as possible and to prescribe a safety protocol for people returning from the Kumbh Mela.  The petitioner, Sanjay Khumar Pathak also sought a direction from the Supreme Court to UOI, and the Uttarakhand Government not to facilitate or support any meeting or event that is contrary to the spirit and object of the COVID-19 guidelines or orders given by the UOI and NDMA.

The petitioner has also requested the Election Commission of India (ECI) to issue  direction to the concerned authorities in the States where election are being held, toimplement COVID-19 guidelines against candidates, campaigners and the general public, during the election process and to take effective legal action against the violators.  In his petition, the petitioner has urged the authorities to recognise those who have violated the COVID-19 guidelines during the election process and to take effective legal action against them.  In his plea, the Pathak has said, "On April 16, 2021 , India has reported more than 12 lakh new cases of corona positive patients . In many states, health-care system is deteriorating. Hospitals and crematoriums are running out of space. Many cities have reported the shortage of essential drugs..." Assembly Elections are being held in Kerala, Puducherry, Tamil Nadu, Assam and West Bengal. The petitioner has said that the respondent number 4 , the Election Commission of India(ECI), has been unable to implement the COVID-19 rules and regulations during political rallies and many campaigning. The petitioner has also said that the Home Minister, the Chief Ministers of respective states and hosts of star campaigners have been seen violating the COVID-19 rules.  It was further stated that despite the fact that India has experienced it's highest COVID-19 outbreak since the beginning of the pandemic, lakhs of devotees are crowding in Haridwar, Uttarakhand for Kumbh Mela and in the election rallies, ignoring the most basic of COVID-19 protocols.  Despite the fact that the disease is spreading at breakneck speed across the country, 25 special trains had been organised by the Indian Railway to facilitate congregation and to connect the Haridwar "kumbh Mela " to various locations for pilgrims, according to certain media reports,the petition tead. Pathak also claimed that the Union Health Minister blamedthe increased spread of COVID-19 on ordinary citizens, saying they  "became very careless" and we're no longer adhering to social distancing norms.  He stated that, 'On one hand, in  the name of the strict enforcement, the police and executive authorities frequently punish and treat the poor common man violently on the street for individuals violations of COVID-19 rules and regulations; on the other hand, the authorities not only permit but also facilitate and promote the public gatherings in events such as Kumbh-2021 and election rallies." Pathak lastly added that it is clear that the authorities are using two separate and mutually incompatible standards when dealing with the Indian citizens.