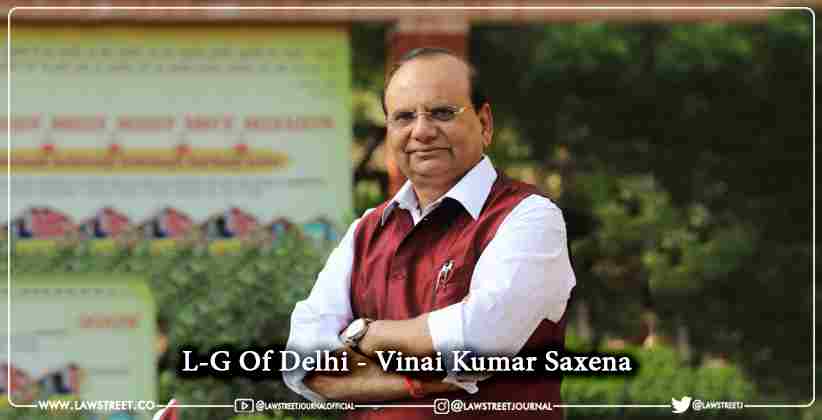 On Monday, Hon’ble President Ram Nath Kovind appointed Vinai Kumar Saxena as the new Lieutenant Governor of Delhi. Saxena will replace Anil Baijal, who resigned from the position last week. In his most recent position, Vinai Kumar Saxena was the chairperson of the Khadi and Village Industries Commission (KVIC). In October of 2015, he was appointed to the position. Mr. Saxena now becomes the 22nd Lieutenant Governor of Delhi.

While talking about his appointment as the new L-G of Delhi, a senior official in the ministry of micro, small and medium enterprises (MSME), said,

"PM Modi is impressed with Saxena’s work in Khadi and the way he made Brand Khadi internationally acclaimed in just seven years."

"The PM always carries some items of Khadi India while on his foriegn trips and presents them as gifts to his international allies, friends and guests. It was the PM’s vision to promote the cottage industry of India, which Saxena implemented."

● Vinai Kumar Saxena was born and brought up in Uttar Pradesh. He graduated from Kanpur University in 1983.

● He began his career as an assistant officer for a private company in Rajasthan before moving to Gujarat in 1995 to become the general manager of the planned Dholera port project, which is being constructed by Adani Ports Ltd. and JK White Cement. He was later promoted to CEO and then director of the project.

● According to BJP sources, he drew the attention of senior BJP and RSS functionaries, including that of Prime Minister Narendra Modi, when an NGO he started, the National Council for Civil Liberties (NCCL), organised a counter-movement to Medha Patkar's Narmada Bachao Andolan, opposing the construction of the Sardar Sarovar Dam in Gujarat and in support of families who were affected by it.

● In the introduction of the KVIC website, Saxena refers to the Patkar’s movement as an “evil design” that was “exposed” by Saxena.

● A year after Modi first assumed office as the PM, in 2015, Saxena was made the chairman of KVIC.

● Khadi outperformed all Indian FMCG companies with a turnover of over Rs 1 lakh crore in the previous financial year, 2021-2022. The organization's annual reports show that its revenue for the 2012-2013 financial year was only around Rs 1,000 crore.

● Recently, the Chairman of KVIC had tweeted his gratitude to PM Modi -

"The resurgence of Khadi & its soaring global popularity is a result of the Hon’ble PM's support & the persistent appeal for "Swadeshi". Thanks sir for inspiring the generation & supporting Khadi like never before."

● Vinai Saxena was appointed to the National Committee to Commemorate the 75th Anniversary of India's Independence by the Indian government on March 5, 2021. The Hon'ble Prime Minister chairs the Committee, which includes former President, former Prime Minister, Cabinet Ministers, Governors, Chief Ministers, and others.

● The Government of India nominated Vinai Saxena as a member of the High Powered Padma Awards Selection Committee for the year 2021 in November 2020. The committee is responsible for evaluating the nominations for the Padma Awards.

● Vinay Saxena was nominated as a Member of the 'Research Council' of the Council for Scientific and Industrial Research (CSIR) - Institute of Himalayan Bioresource Technology on September 9, 2020. The institute's Research Council has the objective of discovering, developing, and commercialising processes and products from Himalayan bio-resources utilising cutting-edge science and technology in order to improve bio-economy through sustainable usage of Himalayan bioresources.

● The Hon'ble President of India nominated Mr. Saxena as a "Member of the University Court" of Jawaharlal Nehru University, New Delhi, on March 18, 2019, for three years in his role as Visitor of the University. This is the institution's highest body.