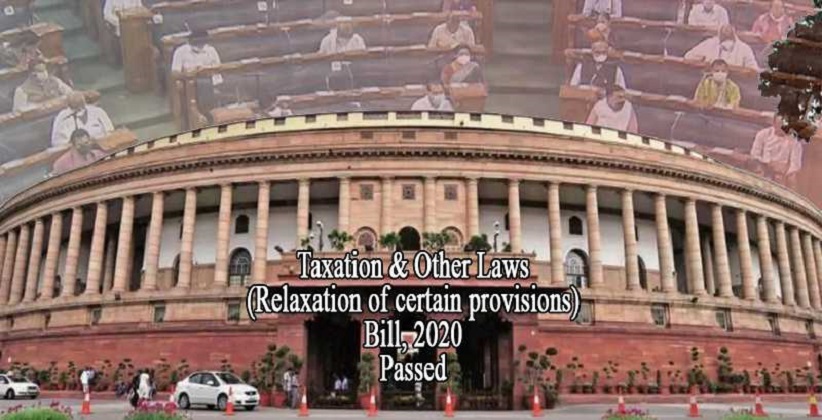 The Lok Sabha passed the Taxation and other laws (Relaxation of certain provisions) Bill, 2020 on Saturday, 19th September which was advocated to relax the time limit on compliance with tax laws, GST payment, filing, etc amid the Covid-19 pandemic.

The Bill, already in force as an ordinance, amends as many as eight legislations viz. the Wealth-tax Act 1957, Income Tax 1961, Prohibition of Benami Property Transactions 1988, three Finance Act, the Black Money and Imposition of Tax Act 2015, and the Direct Tax Vivad se Vishwas Act 2000. Broadly, the amendment is regarding the extension of the deadlines for payment of taxes, GST dues, and grants exemption for donations made to the PM cares Fund.

The discussion on the Bill ignited a debate about the transparency of the PM CARES Fund. Many of the members were asking for the justification as to why it was necessary to introduce a separate, private Fund when there was already a statutory National Disaster Relief Fund existing. It was further highlighted that the NDRF was audited by the Comptroller Auditor General of India, whereas there was no such thing mentioned for the PM CARES Fund and everything was still a mystery and they also pointed out that there was a lack of transparency regarding the donors' details or the public welfare work of the Fund being carried out.

There were certain objections made with regard to permitting of CSR (Corporate Social Responsibility) donations to the PM CARES Fund but not to the CM Relief Funds. AITC Mahua Moitra highlighted that CSR was announced to support the local communities where the industries were situated. However, as the CSR donations were going to the PM CARES, the government is signaling some other intentions which are yet not clarified or answered.

She also objected that what was the reason behind using the name of PM in a Fund especially which was not amenable to the Parliament. She laid emphasis this was giving a false impression to the Fund and regarding it as a government authority whereas it is actually not. The other objection posed by Moitra was that, how had the government expanded the scope of the functioning of the Ministerial offices by allowing the Cabinet to manage a private Fund which was largely supported by Chinese companies.

BJP MP Nishikant Dubey replied to these objections and clarified that CAG can audit the Consolidated Funds of India and the State Exchequer, however since the PM CARES is autonomous about the Budgetary allocations, the CAG cannot audit it. He further specified that the legitimacy of the Funds has been validated by the Supreme Court and the matter should not be discussed repeatedly.

MoS Finance, Anurag Thakur had assured the House that the Fund was created as a Trust under the Registration Act, 1908, and committed that it was a completely transparent trust. The minister further talked about the donations from the foreign countries especially from banned Chinese companies such as Tik Tok, it was stated that foreign donations were allowed under Section 50 of the Foreign Contribution Regulation Act.

These were the extensions that were being provided under the respective eight acts.

The bill also grants some leverage for the assessed that they will not be liable for any kind of prosecution if the payment of tax is done post the due date (between March 20, 2020, and June 29,2020) but before the date as notified by the government. Even the rate of interest payable in case of delay in payment cannot be more than 0.75% per month.

The bill is permitting to extend the time limits for GST-related compliances and actions that could not be finished due to the pandemic situation, based on the recommendation of the GST Council.

The Bill has notified that the donations made under the PM CARES will be completely entitled to deduction under the Income Tax Act. Thus, it can be inferred that the amount donated to the Fund shall be deducted from the concerned person’s income while calculating his total income under the IT Act.

Dispute Resolution with regard to Direct Taxes

The bill has allowed the government to push the time limits for filing of declarations and payments to be made under the Direct Tax Vivad se Vishwas Act 2020 for the matters concerning the resolution of pending tax disputes regarding the Income-tax and corporate tax. For now, the deadline is December 31, 2020, for filing these declarations and making payments.

Dispute Resolution with regard to Indirect Taxes

The Bill has also authorized the government to push its time limits with respect to the resolution of pending matters related to indirect taxes concerning central excise duty and other various cesses under the Sabka Vishwas (Legacy Dispute Resolution) Scheme.

Under the Act, the committee is required to issue its statement within a period of 60 days of the receipt of the declaration but with this Bill, the time bar of 60 days has been removed and it specifies that the committee must issue the statement by the extended time as provided within the bill. Earlier, the person was supposed to pay the amount determined by the designated committee within a period of 30 days of the date of issuing the statement. But the present bill is removing this time bar too and the payment must be done by the extended date as mentioned so.

Thus, the bill offers plenty of time relief with regard to applications, dispute resolution matters, interests, and penalties under income tax and various other acts.