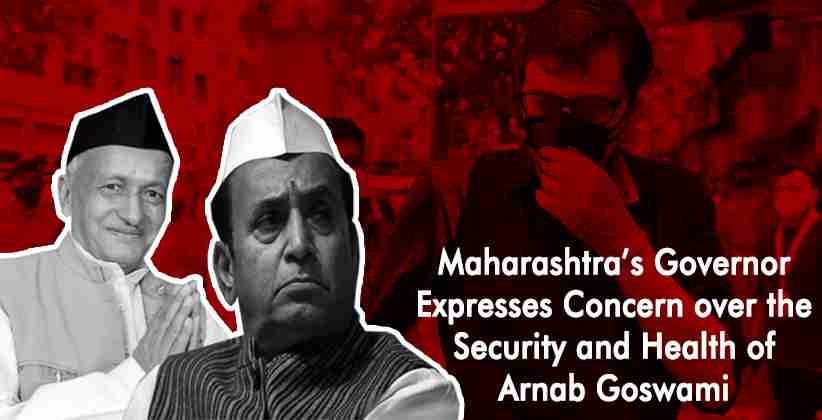 Executive Nov 10, 2020 Parul Singhal ( Editor: Ekta Joshi ) 3 Shares
3 Shares
Maharashtra Governor  has intervened and dialed the State government to convey his concern after the arrest of Arnab Goswami and the alleged news of him being assaulted in jail and not being allowed to meet his family.

Governor Bhagat Singh Koshyari spoke to Maharahtra’s Home Minister Anil Deshmukh this morning and expressed concern over the security and health of Mr. Goswami in jail.  Mr. Goswami was shifted to a jail from a prison quarantine centre on Sunday ( November 8, 2020) after allegedly being found using hus mobile phone, according to a news agency. He was accused of using a mobile phone for social media activity though his phone was seized when he was arrested last week.

When Goswami was taken to Tajola Jail, he shouted from police van that he was assaulted by the jailer at the Aliaug prison on Saturday (November 7, 2020) evening, and that his life was in danger and that he was not allowed to speak to his lawyer.  Mr. Goswami and two others were arrested on November 4, 2020 in connection with the suicide of architect Anvay Naik and his mother in 2018, alleged over dues not paid for his work on Republic TV’s Sets.  The Governor asked the State Home Minister to allow the journalist’s family to meet with him.  Mrs. Goswami in her statement said, “My husband was repeatedly saying my life is under threat but to no avail. He repeatedly said that the jailer assaulted him after he asked for access to his lawyers, which was shockingly denied. He detailed the assault being inflicted on him during this custody and pleaded, hands folded, to the Supreme Court for intervention and bail”.