Mucormycosis kills 518 people in Maharashtra, prompts the Bombay High Court to ask the Union to consider increasing amphotericin B allocation 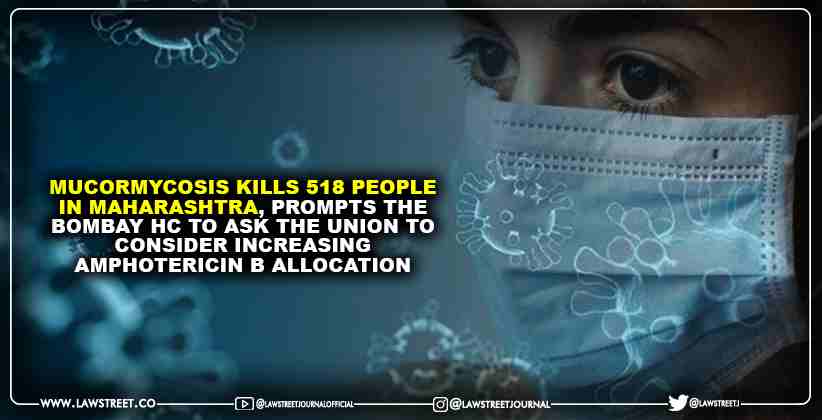 In light of an increase in patients suffering from Mucormycosis, or black-fungus, the Bombay High Court has asked the Union Government to consider increasing the allocation of Amphotericin B injection to Maharashtra.

The court also asked the Union government for information on the injection's state-by-state distribution so that it could assess its fairness. On Tuesday (June 8, 2021) the observation was made by a division bench of Chief Justice Dipankar Datta and Justice GS Kulkarni, while hearing a slew of public interest lawsuits on the issue of COVID management in the state.

Ashutosh Kumbhakoni, the Advocate General of Maharashtra, informed the bench that there were 6,287 mucormycosis patients in the state as of June 7, of which 518 had died, 1,695 had been discharged, and 4,033 were undergoing treatment.

Another 41 patients were released despite medical advice. The court was also informed that, while in-house manufacturing at the Haffkine Institute in Mumbai would produce about 40,000 vials by June 10, this would not be enough to treat the over 6,200 cases because each patient required four to five injections per day for three to four weeks.

For the Union government, Additional Solicitor General Anil Singh informed the bench that the Centre's allocation for Maharashtra was 91,000 injections. However, the number of vials will be increased to 2.7 lakh.

The court then inquired about the total number of black fungus cases across the country, to which Singh replied that the number was around 19,700.

"According to the figures, Maharashtra should receive at least one-fourth of the allocation," the bench advised the centre. Advocate Atharva Dandekar, who was representing petitioner Sneha Marjadi, stated that the number of cases was increasing and that an awareness campaign using automated calls, voicemails, and billboards was needed.

The bench wanted to know what steps the government was taking to inform people about the precautions they should take because black fungus was affecting non-Covid patients as well.

"In order to avoid the disease, people must be told how to do so."The dos and don'ts must be strictly adhered to," the CJ said, noting that "toothache was also one of the symptoms" according to the Centre's guidelines.

In light of an expected third wave, the judges also inquired about Covid-19 prevention measures in children. "You must find out, as the old adage goes, -prevention is better than cure. We must inform parents so that their children do not engage in certain activities or visit locations where they may become infected," it said.

According to the CJ,oOne of the petitioners' lawyer, Rajesh Inamdar, told the court that there was still a shortage of the drug Tocilizumab and that the government had taken no steps to find a replacement. He claimed that the drug was in short supply due to unpaid invoices.

On Thursday (June 10, 2021), the division bench of Chief Justice Dipakankar Datta and Justice GS Kulkarni asked, “What are the criteria for distribution? What is the mechanism behind it? Is it really getting to the people who need it?”

The bench went over the report that the Centre had given them. They noted that the Andaman and Nicobar Islands, Daman and Diu, Dadra and Nagar Haveli, and Lakshadweep had no cases of black fungus. However, 500 vials of Amphotericin-B have been allocated to Daman and Diu and Dadra Nagar Haveli.

“For five regions, you have shown zero cases. However, the distribution shows that the first four states receive zero drug allocation, while the fifth receives 500? This classification does not appear to be accurate. There is only one case in Manipur, and 50 vials of medicine have been allocated. However, in one case in Tripura, there is no allocation. What are the criteria for distribution?,” Anil Singh, Additional Solicitor General, was questioned by the bench.

As of June 10, the Maharashtra government informed the Bombay High Court that there had been 518 deaths in the state due to mucormycosis. As of Thursday, the number had risen to 600.

Between May 11 and June 9, Maharashtra received only 4,060 vials of Amphotericin-B per day, according to the court. “This is an excessively low supply. Maharashtra accounts for 25% of all cases. However, Amphotericin-B does not receive a 25% allocation. It's only a quarter of a percent. In just 36 hours, 82 patients died. Was there any attempt to bring this medicine into the country?," the court inquired adding, "Why was it delayed?"

The bench said, urging the Centre to increase the anti-fungal drug's allocation, “Ensure that the budget is increased. We do not want deaths due to a lack of medicine.”