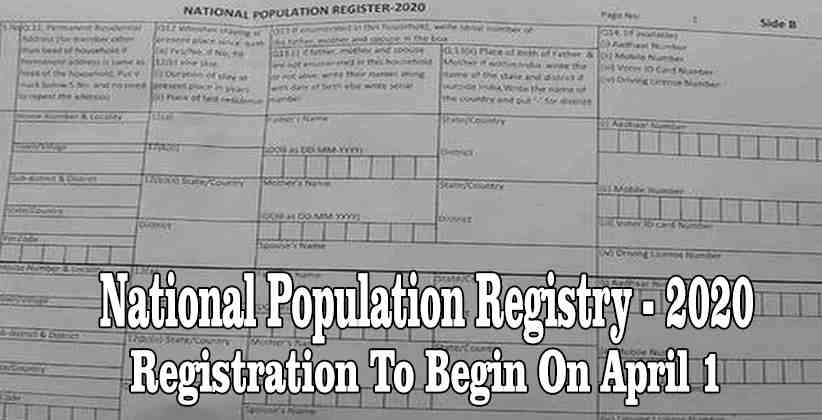 As reported on 17th February, 2020 the current government's exercise to initiate the National Population Registry (NPR) is an ongoing controversial topic and thereby the exercise officially begins on April 1st, 2020. The New Delhi Municipal Corporation area will be the first area to conduct the update and the current President Ram Nath Kovind will be the first person to have registered as the President who is considered the first citizen of the country.  Prime Minister Narendra Modi and Vice President M. Venkaiah Naidu will also be added in the list on the very same day. The officials want to showcase a positive and reassuring message after having added the senior leaders to the NPR.

Several states have criticized and questioned the motives that lie behind the update of NPR and that will be used through the linkage for a nationwide National Register of Citizens (NRC). They believe this is a combination to the controversial Citizenship Amendment Act (CAA) that can be used to take away the citizenship of the Muslims.

Kerala has put forth the contention that it will not conduct the update, West Bengal has put the process on hold. Congress rules states have questioned as to why the centre has added the new fields to the questionnaire that would impose the extraction of further information.

The Modi government claims there is no linkage whatsoever between the NPR and NRC. The records claims otherwise.

“The National Population Register (NPR) is a register of all the usual residents which include citizens and non-citizens as well. The NPR is the first step towards creation of National Register of Indian Citizens (NRIC) by verifying the citizenship status of every usual resident.”

The NPR is an assessment of the usual residents based on their place of residence. The NRC is a process to register the Indian citizens with objective of identifying the infiltrators infused in the country. Many people have considered NPR as a beginning stage that will soon be pushed towards the NRC. The very possibility of creating an NRC through NPR lies in the 2003 Citizenship Amendment Act.

The Registry forms will be printed in March. A total of 23 fields of information and an undertaking will be available on the form that would state the information declared by the person to be held true.

It is further put forth that the President and the PM are likely to give out a message to the nation, following their enrollment in the coming days.