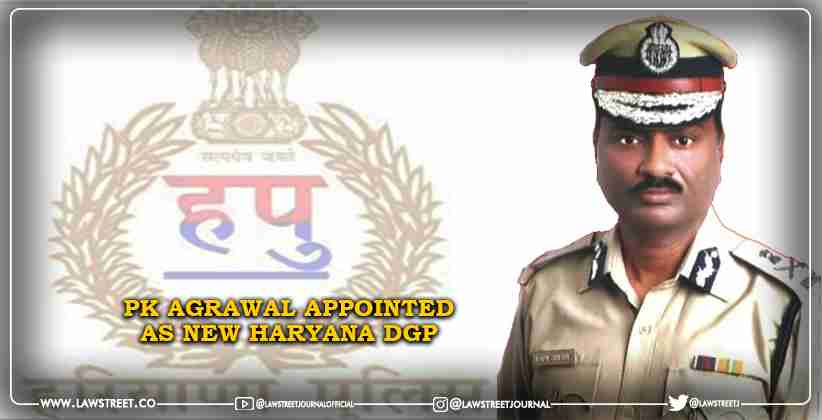 Prashanta Kumar Agrawal, a senior IPS officer, was named the next Director-General of Police (DGP) of Haryana by the Haryana government on August 16, 2021 (Monday).

Manohar Lal Khattar, the Chief Minister of Haryana, welcomed Agrawal on his appointment.

At police headquarters in Panchkula, Agrawal took over as the new DGP from former DGP Manoj Yadava.

Agrawal, a Bihar-born IPS officer from the 1998 batch, has worked as an ASP, Additional SP, SP, Range IGP, and Commissioner of Police in several districts.

He had worked as DGP Crime and Director General, State Vigilance Bureau, before being named DGP Haryana.

Agrawal, who was awarded the Police Medal for Meritorious Services in 2004 and the President's Police Medal for Distinguished Services in 2015, also attended  workshops, conferences, and training classes at the Bureau of Police Research and Development in New Delhi, National Institute of Criminology and Forensic Sciences (NICFS), Intelligence Bureau, Central Bureau of Investigation (CBI), Narcotics Control Bureau (NCB), Xavier School of Management (XLRI), Jamshedpur, including the NCTP at the National Police Academy (NPA), as well as exposure to law enforcement agencies in the United States.

He added, "I would indeed work on strengthening the police-public interaction."

He additionally expressed gratitude to Chief Minister Manohar Lal Khattar and Home Minister Anil Vij for placing their trust in him and appointing him with the role of DGP Haryana.

He described Haryana Police as one of the greatest police forces in the country, saying that the force has made many commendable efforts in the past.

“I will do my utmost to work in accordance with the expectations of the state's residents,” he concluded.

In response to the latest question paper leak in the police constable recruitment, the DGP stated that corruption has no place in police operations and would not be allowed at any cost. If there is any evidence of corruption, the perpetrators will be prosecuted to the full extent of the law.

Haryana Police has made a lot of efforts in the past, which were really praiseworthy, Agarwal added, describing Haryana Police as one of the greatest police agencies. I would do my utmost to operate in accordance with the expectations of the state's citizens.

He expressed his gratitude to Chief Minister Manohar Lal Khattar and Home Minister Anil Vij for placing their trust in him and entrusted him with the duty of serving as DGP Haryana, saying that cybercrime has presented a new challenge to the police. Throughout times, there has been a tremendous growth in the usage of cellphones and internet banking.

Many scammers are using modern technology to carry out their criminal activities in order to attain their ulterior goal. To successfully combat such criminality, we shall embrace and enhance expertise. Besides that, he claimed, the investigation quality will be raised in the coming days to crack down on such offenders, adding that he would emphasise the use of technology and scientific techniques for crime prevention and case investigation.

The Haryana government named Agrawal as the next state police chief on August 15, 2021 (Sunday), three days after the Union Public Service Commission (UPSC) finalised a panel of three IPS officials from Haryana. Mohammad Akil and R C Mishra, both from the 1989 class, were among the other empanelled applicants.