The Rajya Sabha unanimously suspended the Question Hour on January 3, 2021 ; Zero Hour & Question Hour for February 4, 2021 and the Private Members' Business scheduled on Friday (February 5, 2021) to allocate more time to discuss Motion of Thanks where members can raise the issue of farmers' protest.

During the discussion about the passing of farm laws in September 2020, the Rajya Sabha had suspended 8 opposition MPs citing ruckus in house.

MPs Sanjay Singh, Sushil Kumar Gupta and ND Gupta were asked to 'withdraw' from the House after they incessantly raised slogans against the three Farm Laws.

On Tuesday, 2nd February, 2021 proceedings in both the Upper House and Lower House of the Parliament were interrupted after Opposition parties' request to suspend business of the day to discuss farmers protest was denied.

Thousands of protesters, mostly from Punjab, have been camping in the border areas of Delhi-NCR since November 26 raising a demand that the Central Government repeal the recently passed farmers laws.

The Chairperson urged them to not interrupt the House proceedings and assured that the farmers issue will be discussed during the 15 hours allotted for Motion of Thanks on President's Address.

The Supreme Court is hearing a batch of PILs seeking immediate removal of protesting farmers from border areas of Delhi-NCR on the ground that they increase the risk of COVID-19 spread in Delhi.

Under Rule 255, the Chairman may direct any member, whose conduct in his opinion is "grossly disorderly", to immediately withdraw from the House.

It ordered that the MSP system as it existed before the enactment of the laws must be continued and no farmer shall be dispossessed or deprived of his title as a result of any action taken under the laws.

The Top Court is also seized with petitions challenging the three Farm Laws.

However, when the three MPs did not desist, the Chairperson proceeded to impose Rule 255 against them.

This is different from a Suspension under Rule 256 where the concerned MP is suspended from remainder of the Session. 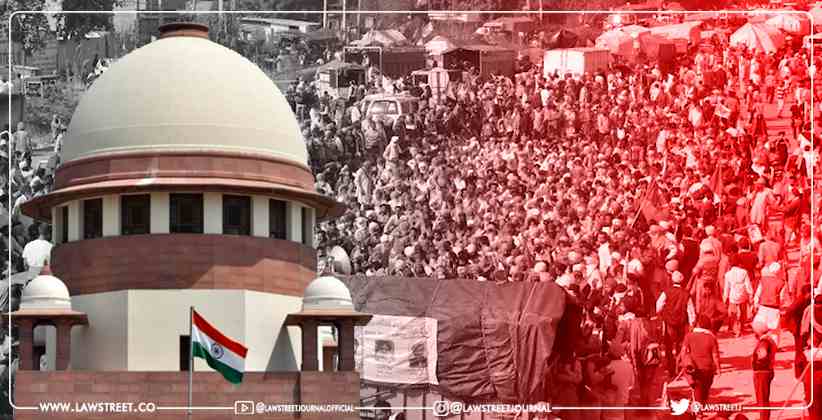