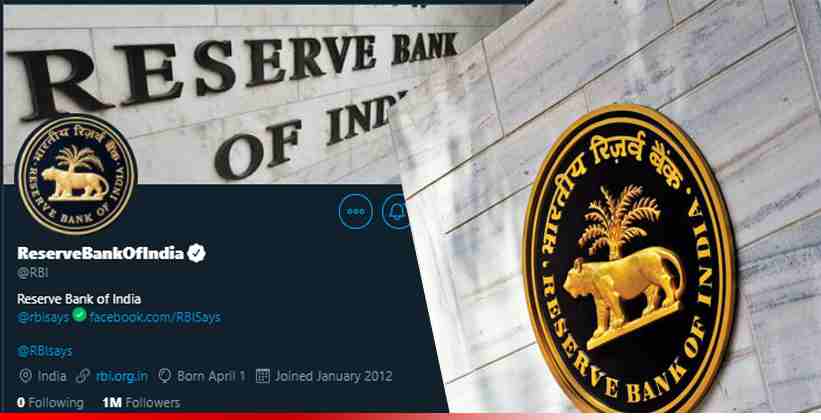 The Reserve Bank of India (RBI) has become the first central bank in the world to have more than one million or 10 lakh Twitter followers. Bank colleagues were congratulated by the RBI Governor Shaktikanta Das.

As of Sunday (22nd November 2020), more than 10, 00, 000 people around the globe are following RBI’s Twitter handle and it has become one of the most popular central banks in the world.

RBI has over taken the US Federal Reserve and the European Central Bank in the race of number of Twitter followers.

RBI’s which is an 85-year-old central bank had joined Twitter very late and it is an achievement to reach more than 10, 00, 000 followers on the social media webiste.

It is atonishing that the world’s most prominent central bank, The US Federal Reserve, has only 6.77 lakh followers while the ECB which is the second-most powerful monetary authority in the world has 5.91 lakh followers on Twitter.

ECB is followed by the Central Bank of Brazil with 3.82 lakh follows and then comes the Bank of England with 3.17 lakh followers.

Bank of Canada is the next in line in terms of Twitter followers with 1.80 lakh people follwing it from around the globe whereas the State Bank of Pakistan has1.16 lakh followers.

As many as 2.5 lakh new people have started following RBI’s official Twitter account in the current financial year making it the most followed bank on the social media site.