All you need to know about the Republic Day Parade, 2021 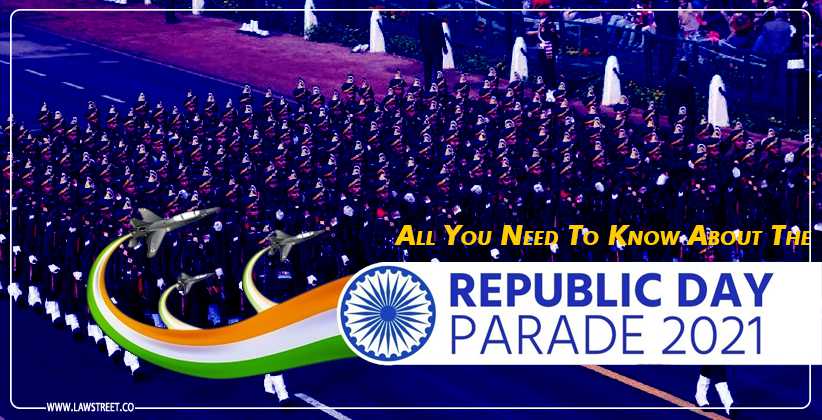 Executive Jan 26, 2021 Lawstreet News Network ( ) 4 Shares
4 Shares
Every year on January 26th, we have the largest and most important parades take place in the capital city of New Delhi. The event marks the adoption of the Indian Constitution – the day when we truly became a democratic republic.  The ‘Republic Day’ celebrations commence with a march from the Rashtrapati Bhavan along the Rajpath and cease at the Indian Gate. This is followed by the unfurling of the National Flag by the President of India along with feverous marching from the army, navy, and air force. While the celebration is mostly boundless each year, it is expected to come with a stringent set of restrictions amid the ongoing pandemic. Here’s how the 72nd Republic Day gathering is expected to take place in the country:The Parade: Much like the previous years, the Republic Day Parade will start at Rashtrapati Bhavan. The route followed will be Vijay Chowk via Rajpath, Amar Jawan Jyoti, India Gate Princess Palace, and Tilak Marg until the endpoint. The parade will be shorter this year and instead of going up till the Red Fort, it will end at National Stadium. Flag Hoisting: Owning to the many restrictions in place, the Republic Day Event will likely wrap up faster this time. The flag hoisting will take place at 8 am. The parade will start at approximately 9 am and end around 11 am. The timings may further differ keeping in mind the present situation. Number of Attendees: Given the social distancing norms, the number of attendees will also be cut short. In all, 25,000 spectators will be allowed as opposed to the 150000 last year. The number of media personnel will be restricted to 200 as against the general count of 300. Children under the age of 15 will not be allowed to partake in the event. Similarly, the size of marching contingents will also be reduced to 96 from 144. Tableaux: A total of 32 Tableaux will perform at the parade consisting of 17 of various states and UTs, nine of ministries, and six from the country’s defense arm. In addition to Gujarat, Assam, Tamil Nadu, Maharashtra, Punjab, West Bengal, Uttar Pradesh, Delhi, and others, the Union Territory of Ladakh will be participating for the first time at the parade. It will display the Indian Astronomical Observatory which is located near Leh. The contingent from Bangladesh will also mark the third instance of a military contingent from a foreign nation participating in the parade. The Tableaux will start from Vijay Chowk and proceed to Red Fort Ground. Tickets and Entry Details: As stated by the Delhi Police in a tweet, "This year, Entry to RDC-2021 will be strictly through Invitation Card/Ticket only! All those, who don't have a valid Invitation Card/Ticket are advised to watch the live program at home. Children below 15 years of age are not allowed to RDC-2021 at Rajpath." This means that entry to the parade will be strictly permitted based on invitations. No free entry will be allowed this year. Further, merely 4,500 tickets have been restricted for the general public this year. In line with the prevalent precautions, invitees are further advised to not carry bags, briefcases, pins, eatables, cameras, binoculars, handy-cams, electronic gadgets such as i-Pads, iPods, palm-top computers, laptops, computers, tablet computers, power banks, and digital diaries. Live Streaming:  The parade can be watched live on a special mobile application that has been launched by the Defense Ministry for the occasion. Called the 'Republic Day Parade 2021' or 'RDP 2021', it will provide a live telecast of the parade and also give updates on route map and parking. In addition to the application, the parade will also be broadcasted on DD News and its official YouTube channel. Private News Channels will also air the event live. Other Details: The event will be devoid of a Chief Guest this year after British Prime Minister Boris Johnson announced that he will be unable to make it due to the rising COVID cases in the UK. Keeping in mind the safety norms, the parade of gallantry awardees and children who have earned bravery awards will also be done away with this time. The much-touted motorcycle stunts by military personnel will also not be performed this year. Tight security and traffic control arrangements have already been made for the parade along its route. The Delhi Police has also deployed five-layer security in and around the city and at the Singhu, Tikri, and Ghazipur borders in anticipation of the farmer’s rally and protests. Although the Republic Day celebrations are mellowed down this year, there is no lack in the Indian spirit to welcome the grand occasion. On the 72nd year of this honorable event, here’s hoping that we all exercise our constitutional freedom in line with our fundamental duties and set the nation on the path of progress! Jai Hind!