The Centre opposed the plea filed before the Delhi High Court seeking recognition of the rights of same-sex couples to get married under the Hindu Marriage Act, 1956. The Solicitor General, Tushar Mehta representing the Union of India submitted his arguments stating that same-sex marriages are neither known nor recognized under the Indian culture or the Indian law. The Solicitor General clarified, “Our culture and law don’t recognize the concept of same-sex marriages”

“As per law, a marriage is only between a husband and a wife”, Mehta contended and urged that Hindu Marriage Act didn’t identify any sort of same-sex marriages. The SG further mentions that the culture of a nation is codified in statutory provisions like the degree of prohibited relationship, special or additional rights to “wife”, different age limits of husband and wife, use of terms of “husband” and “wife” (which could not be determined in the same-sex marriages), special protection to “wife” in criminal law such as Section 498-A IPC and many more. He stated that unless these provisions are changed, which the court cannot do, the relief pleaded for cannot be granted.

The Bench was comprising of Chief Justice DN Patel and Justice Prateek Jalan, who have articulated that such a petition should be observed with a broad mind and he acknowledged that the position of the law might be different and the Benchmarked that “changes are happening across the world”. SG Mehta referred to the 2018 Judgment of Supreme Court, Navtej Singh Johar’s case which demanded to legalize consensual homosexual activities, “nothing more, nothing less”.

The Court also suggested the petitioners (activists and members of the LGBTQ community) that they could first try and get their marriage registered and in case the registration was denied, they could plead before the Court with their grievances. Advocate Raghav Awasthi was representing the petitioners, who informed the Court that there are plenty of cases where the gay couples who wanted to get married but were denied registration.

The court thus asked the petitioners to bring the records of all those gay couples whose marriage registration was denied in the next hearing and posted the matter to be heard again on 21st October. The court was hearing a PIL that wanted a declaration regarding the rights of same-sex couples to get married under the Hindu Marriage Act 1956.

The petition was filed by the activist and member of the LGBTQ community who claimed that the Hindu Marriage Act permitted the marriage between ‘any two Hindus’ without discriminating between homosexuals and heterosexuals. The petitioners are Abhijit Iyer Mitra, a member of the LGBT community, Gopi Shankar M, Tamil Nadu based inter-sex activist who contested in 2016 assembly elections, Giti Thandani, founder member of Sakhi Collective Journal of contemporary and historical lesbian life in India, and G. Oorvasi, a transgender activist.

The petitioners argued that under Section 5 of the Hindu Marriage Act, it is nowhere mentioned that “two Hindus” who are getting married must be a Hindu man and Hindu woman. The PIL further states that even though the Supreme Court struck down Section 377 of the IPC and decriminalized consensual homosexual activities two years ago, it is still not possible for gay couples to get married legitimately. The petitioners stated that, “…. Despite the fact that there is no bar under the Hindu Marriage Act of 1955 and Special Marriage Act of 1956 against gay marriages, the same is not permitted to get their marriage registered throughout the country and also in the National Capital Territory of Delhi.”

Thus, it is prayed by the petitioners that Section 5 of the Act should be given effect and the right for the homosexual to get married under the Act should also be recognized by the Court. Advocates Mukesh Sharma and Raghav Awasthi further contended that denial of the right to marry will infringe the fundamental right of LGBT people protected in the Constitution.

The plea reads as follows, “the non-recognition of rights of gay couples, especially when their sexuality is already recognized by the Supreme Court of India is violative of the provisions of the Constitution of India as well as to the several conventions that India is a signatory to.”

As per Article 21 of the Constitution of India, it is explicitly stated that the right to marry is an admitted aspect of the right to life, and asking that right to be for same-sex couples is neither radical nor complex. This kind of discrimination against one particular community is refuting them from enjoying the same right which stands under clear violation of the Right to Equality as granted under Article 14 and 15 of the Constitution of India, adds the petition.

Lastly, the plea of petitioners is seeking enforcement of equal rights and only pray that “implementation of the universally applicable guarantee of non-discrimination in the enjoyment of all rights. The ban on the marriage of LGBT people on the basis of sexual orientation and gender identity is complete discrimination towards them and is also violative of Right to Equality as granted by the Constitution of India.”

The contention of the petitioner rests on two universally accepted fundamental principles of Equality and Non-discrimination. As per the International Human Rights law, it visualizes the birthrights of all human beings and states no exception in this case.

It was pointed out that the Supreme Court has recognized the right of people to choose their sexual identity as a fundamental right forming the part of the right to privacy and individual autonomy under Article 21 of the Constitution as per the verdict of the 2014 NALSA case and 2018 Navtej Singh Johar case which legalized homosexuality. Hence, the petitioners are of the opinion that approving homosexual marriages will not affect the foundation of marriage, and not allowing the LGBT community of marriage might have an adverse impact on their mental condition.

Judiciary Jul 07, 2021 Rashbana Thansi ( Editor: Ekta Joshi ) Shares
0 Shares
On Tuesday(06/7/2021) The Delhi High Court issued notice to the Centre in a petition seeking a declaration that the right to legal recognition of same-sex marriage is a fundamental right under Articles 14, 15, 19 and 21 irrespective of a person’s gender, sex or sexual orientation.The petition also sought to declare that a spouse of foreign origin of an Indian citizen or Overseas Citizen of India (OCI) cardholder is entitled to apply for registration as an OCI under the Citizenship Act...
Read full post 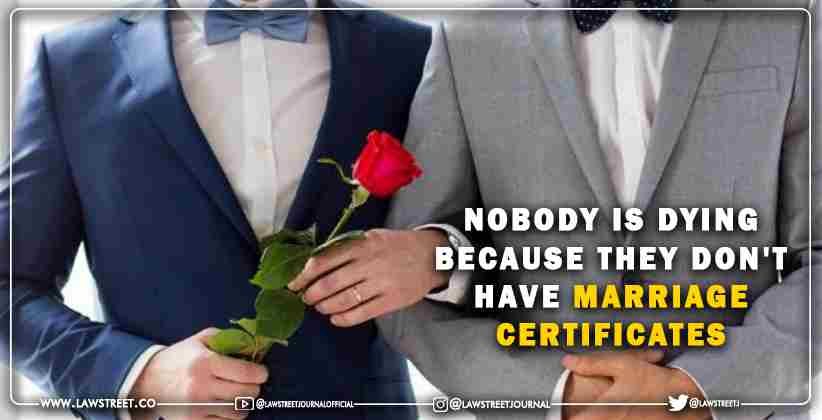 Executive May 24, 2021 Shreyas Nair ( Editor: Ekta Joshi ) Shares
0 Shares
"You don't need a marriage certificate for hospitals, because nobody is dying because they don't have a marriage certificate," the Union of India told the Delhi High Court today, arguing against the immediate hearing of a batch of pleas requesting approval of same-sex marriages in India under various personal laws.The centre had filed a suit for adjournment, claiming that the court was only considering "highly urgent" cases at the time and objecting to the bench's roster. Taking this into...
Read full post